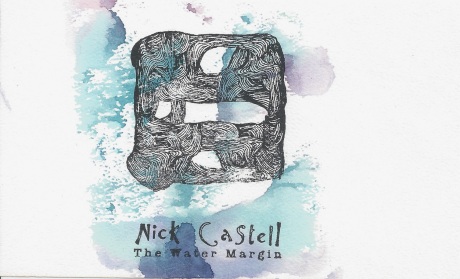 A fine set of deep folk interventions from folk guitarist Nick Castell in this 13-track cassette on Scissor Tail Records. Following on from several digital /CD-R releases, notably 2011’s Deep Beneath The Mountain In The Palace of Owls, this is an assured and fluid set. Castell’s guitar style is elegant,and unhurried, taking time to search for the perfect note or melody and surround it with space, while reaching back into the woody thickets of the folk tradition to draw on the element spirit therein.

That said this is not a display of holy relics. Castell also performs in a vocal duo with Nathaniel Mann – he of the mighty and bearded Dead Rat Orchestra – and, like the Dead Rats, Castell knows just when to draw on the folk tradition and when to keep it at arm’s length. This results in pieces infused with the flavours of the old world, but moulded into something new and original. Per Marie, Per Ecclesiam’s brambly call and response motifs are a fine example, as is Bulverhythe’s rippling, sun-dappled finger picking. The Flying Clouds is another treat, its stately guitar figures unfurling at their own pace with a sighing melancholy.

Yet there are quirks aplenty. Quarter Century gives us two minutes of echoing piano before a beautiful, curling guitar melody creeps in, like a window opened in an empty room. The piece changes shape again in the last section of its seven minutes, with sinister drones and ghostly whistling giving it a clammy, unsettling feeling.

Actually, the more I listen to this tape, the weirder it gets, as Castell refuses to be bowed into submission by the weight of folk music history at his shoulder. Bixi’s courtly, elegant picking would be a mellow delight, were it not for the disconcerting feedback-like whine that echoes behind it, rendering it very uneasy listening. A Geographic Impossibility is a mangled collage of field recordings of church bells and choirs; scratchy and warped, it sounds as if it has been beamed from some far off place via malfunctioning future technology.

Castell also casts his gaze wider than Britain’s rain-drenched archipelago. The Water Margin’s hollow pluckings and grating strings have a pleasingly austere and marshy feel, appropriate for a tune sharing a title with a 1970s Japanese serial based on a classic of Chinese literature. Meanwhile, Verily is a squint-eyed, knock-kneed jig, a wild mercury ghost from some lost Appalachian nook which abruptly loses its energy halfway through, transforming into a mournful lament.

This latest release from Castell is an absorbing and diverse collection, a baker’s dozen of tunes for you to wander through and get lost in. He’s a real talent, this boy. Keep an eye on him.

Get The Water Margin here.

Take a listen to more of Nick’s music here.

Keep an eye on what Nick is doing via his Facebook page.