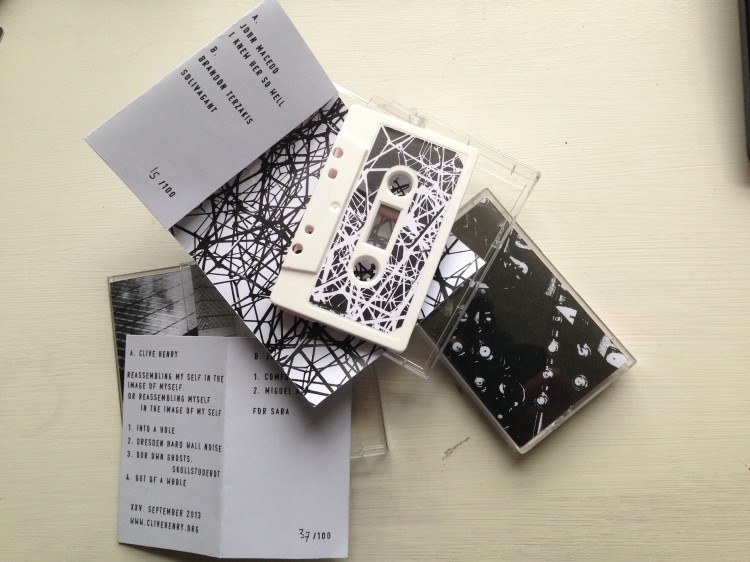 I first came across SoundHoles records via its loud ‘n’ lovely rendering of a live BBBLood session at the Crate Lake festival in Leeds, so when this latest trio of tapes was announced I knew I had to get my gloves on ’em. Sure enough, there’s plenty to enjoy in these lovely globules of cassette smear, from yodel-filled grit through analogue electrical itchings to belching noise. Tasty stuff, what.

Let’s start with Diagram A’s scuffed and rumbling blur, Drawing Utensil Ganglia. The Western Massachusetts-based Dan Greenwood has assembled a craggy chunk of mineral static, a follow-up of sorts to last year’s truly great Your Object, as mysterious as a circle of standing stones on a storm-blasted hillside.

I imagine seekers and knowledge heads making pilgrimages to this place, drawn by its mythical resonances. They spend thirsty days and freezing nights poring over its rugged surfaces and strange inscriptions. Yet instead of enlightenment, they find starvation and insanity, driven mad by the constant wind. They see visions of wizened faces and hear screams carried in the gales.

The Macedo / Terzakis split tape is, in its way, just as evocative. Macedo’s track, I Knew Him So Well, is a humming, bubbling slice of modular exploration. Its early section ripples with many individual flickers of life, a vista of tiny creatures swarming together into a hive mind. After a fragment of a human voice, there is an abrupt change into a pulsing, electro-mechanical oscillation. Its hypnotic phase seems designed to lull us into a state of psychic blankness as it extends out into the air. Occasionally, muffled voices call out, messages from beyond the veil.

Terzakis, in contrast, creates a glowing veneer of sound, starting with a single omnipresent sonic beam and then gradually bringing in both higher and lower frequencies to build a beautifully stratified drone. The title of the piece, Solivagent, means to wander alone, yet this track is almost choir-like in the way it brings its different voices together. The eternal sustain that carries these voices is, however, utterly un-human.

The final cassette in the threesome is another split, Clive Henry and Joined By Wire sharing the bill on this one. It’s longer than the other two – a C60 – which gives them about half an hour each to stretch out. Henry’s side, titled Reassembling My Self In The Image Of Myself Or Reassembling Myself In The Image Of My Self in particular benefits from this spaciousness. He roams from micro-electrical fidgets and debased vocal manipulations through gravelly electronic bish bosh and whacked out noise tapestries. It’s good alright, especially when a mournful four-note repeating motif foghorns out from the mush, a distress signal from a corroding hulk on a long-dead world.

Somerset duo Joined By Wire keep up their end of the bargain as well, with two hieratic jams, extended pieces that are luminescent curtains of analogue fuzz, shimmering with light even as grimy noise and echoing thumps threaten to burst through the numbing haze.  The cosmic drone is strong in these young ones, but there is an underlying sadness that gives them emotional heft. But the brace of tracks pushes on determinedly towards the light, refusing to let darkness drown them. Who loves the sun? We do.