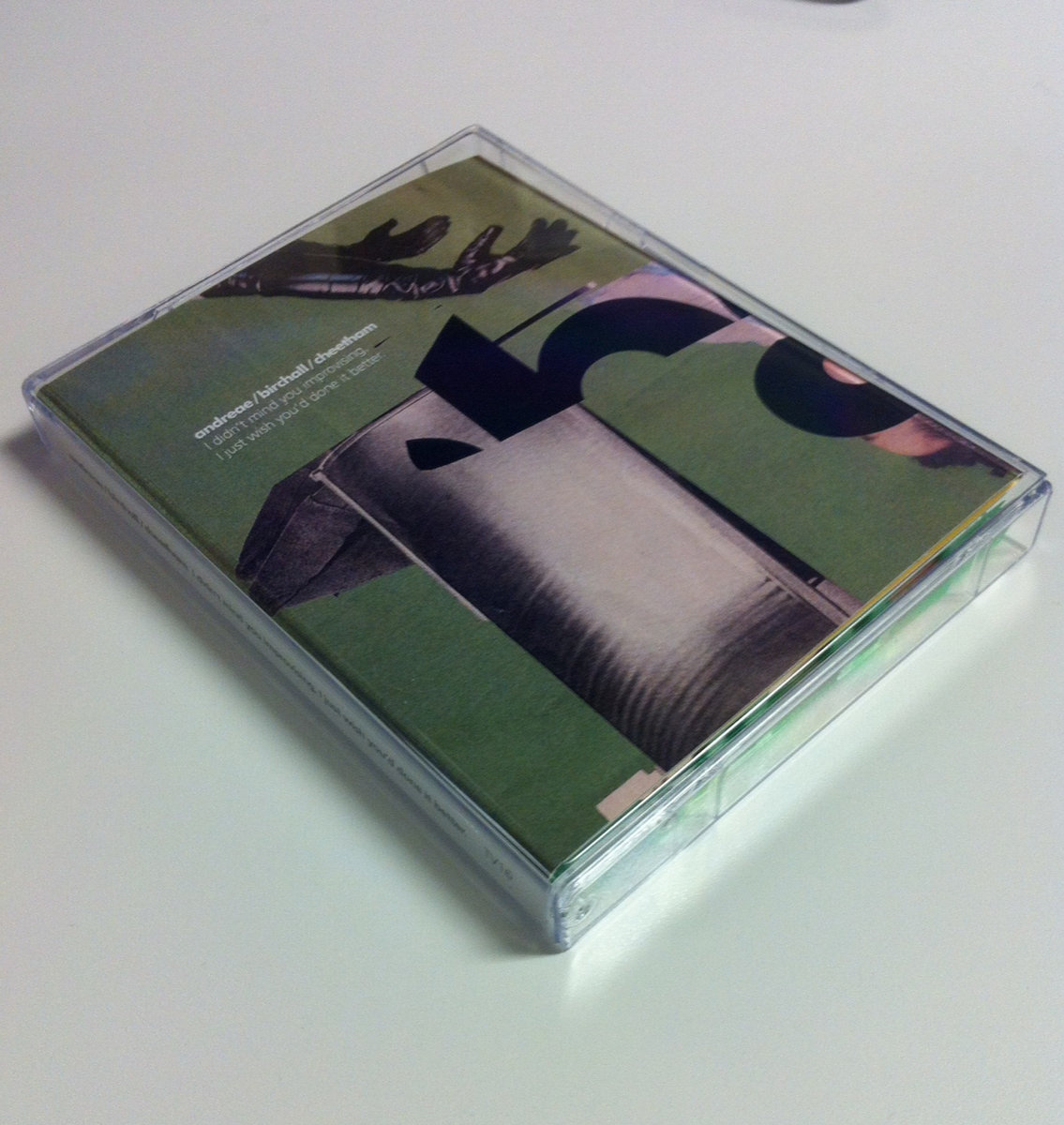 What better way to celebrate the coming of spring than dishing up this scuzzy free improv session. This fine tape has grime under its fingernails and is ideal for anyone who thinks those classic-style unadorned free improv records occasionally feel a tad sterile. No danger of this here. I Didn’t Mind You Improvising, I Just Wish You’d Done It Better is a grubby, punk inflected jam whose dank aura occasionally edges towards the downright sinister as it glowers and scrapes in the shadows.

The titular threesome of Samuel Andreae, David Birchall and Andrew Cheetham are all superb artists in their own right but here they lock together to deliver a righteous free jazz Armageddon. Birchall’s guitar squats somewhere between an early Sonic Youth style metallic drizzle and an almost McLaughlin-like fuzzy squiggle. He doesn’t quite hit Meeting of the Spirits levels of noodle but his fiery playing certainly whiplashes through these tunes with bracing ferocity. Even on the neo-reductionist clench of Post-Nasal Space, he manages to bring some heat to the deliberately uptight vibe, his scratches and metallic twangs like boiling shards of magma from some distant volcano, raining down on the dusty earth.

Trio sessions are, at their best, slightly unbalanced, the risk of collapse adding an element of frisson. That’s certainly true here with the four tracks of this tape seeming to rock and vibrate like a set of interconnected spinning plates. The two-minute spasm of Dude, You Look Like Sea Sick Steve is particularly splenetic, careering around from pillar to post like an electrocuted squid, Andreae in full-on shredding mode as Birchall’s guitar wails and Cheetham knocks seven shades of … well, you know from his kit.

Drummer Cheetham knows when to blast and when to seethe, and is able to switch between these two modes at will. He’s great when he really lets loose but the quieter moments are cool too, like on the final track, It’s A Symmetrical, Asymmetrical Problem, where he avoids the big beats for skittering, shimmering interventions. Occasionally it sounds dead ritualistic, all slow radiance and gong-like drones, but more often he’s mischievous, shuffling and clattering round like some kind of Norman Wisdom character let loose in the drum booth.

As for Andreae, well, he seems to be engaged in a one-man programme to reinvent the sax from the ground up. He’s all over these four tracks like a rash, buzzing and screeching with an almost revelatory incandescence. On the introductory section of opener Erich Frohm Where he sustains a lengthy, almost hieratic drone, at first coming in underneath Birchall’s feedback then moving front and centre as the guitar shifts and curls into broken shards, phasing and fattening into glorious howl that slowly starts to oscillate and vibrate like some post-Brötzmann foghorn, while all the time Cheetham does his thing in a liquid swirl of percussion. As a way to get things started it ain’t bad, a kind of Coltrane-in-the-junkyard overture, ushering in the coming storm.

I Didn’t Mind You Improvising, I Just Wish You’d Done It Better is a whole bunch of glum fun that’ll whet your appetite for more unhinged voyages from this trio. Stay raw, brothers.

Ch-ch-check it out here