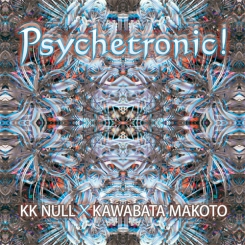 These two overlords of the Japanese underground are part way through a European tour at the moment. I missed them as they breezed their psych-noise tumult through my manor, so instead I’ve been making do with this CD of intergalactic rumpus, released earlier this year on Hong Kong’s Noisoke records.

The duo first hooked up for a tour of Japan in late 2014, and this CD was recorded at the same time. They’ve both recorded for Noisoke as solo artists – Makoto’s Love Phase, issued in 2013 and KK Null’s Material of Darkness from the same year – but Psychetronic! is their debut as a duo. It’s an inspired meeting of minds, the tough machine surfaces of KK Null’s (aka Kazuyuki Kishino) usual output, given an unsettling humanoid character by Makoto-san’s flailing guitar debauchery. Cyborg noise improvisation! Yeah!

The single, 45-minute track starts off with a positively oceanic drift, all slo-mo liquid synths and shining electronics, a bit like some of the real good Tangerine Dream stuff from the early 1970s, massive and echoing. Atonal piano and guitar chords start crashing in, busy, frenetic, but still swathed in echo, before a burbling bass oscillation takes us out from the ocean into deep space, all the while accompanied by squeals and fuzzy groans.

Those oscillations pitch abruptly up and down, and they’re just a bit too fast to be cool, or even melodramatic. It’s more like the soundtrack to some madcap vaudeville car chase, but in deep space, like some manic out-take from John Carpenter’s Dark Star. It’s all very musique concrete, crashing about with a vertiginous abandon, or perhaps a stoned glee.

After that things calm down a bit – although things are still pretty caffeinated – with a long stretch of waywardly pulsing electronics overlaid with molten guitar noise, before settling into a template of piano-falling-down-stairs crashes and overloaded mechanical squeals.

Those unfamiliar with Makoto’s solo work may be surprised at the lack of incendiary soloing on offer here. Instead, he mobilises an array of stormy distortion, screeching and howling in perfect lockstep with Kishino’s bubbling electronic stew. It’s a chunkier, more abrasive beast than the relatively peaceful noise of Kawabata’s In The Black Lodge of Price Frederick, which came out a couple of months ago, yet it complements that recording perfectly.

There’s a proper blistering section about 20 minutes in, a kind of earthmover full-spectrum blast, although any po-faced seriousness it may have is undercut by the acidic squelches of the retro synths flitting across its gnarled surface. A few minutes later, the noise takes shape into a firecracker-like sequence of high-BPM explosions and pops, although the potential to turn it into a furious Gabber workout is stymied by its jerking irregularity.

After that, the fun and games continue for another 20 minutes or so, with endless, void-like stretches of synth occasionally kicking into life for guitar and Kaos pad insanity, constantly morphing and transforming into all sorts of lysergically distorted shapes. The Tangerine Dream oscillations return at around the half an hour mark, giving Makoto the opportunity for some atonal string bending, his soloing strafed by some ravey synth lines, before everything flies off into the abyss.

Occasionally around this point, some bloody great drums come crashing in from nowhere. It sounds someone is attempting to glue the rhythm track from Led Zeppelin’s Kashmir over the top of sonic leftovers discovered in Daphne Oram’s wheelie bin while under the influence of some spectacularly fungus-laced Earl Grey.

It is, of course, fantastic.

You probably don’t need any more of this blow-by-blow account to know whether Psychetronic! is worth investigating further. I could point to the steampunk noise techno section at about 36 minutes – which yolks a chassis of dirty grey noise to a banging four to the floor engine for additional fun and frolics –but you’ve probably already  made up your mind whether this is for you or not. Do whatever you want, or don’t do whatever you don’t want.

Personally, I think it’s great, a synthesis that is considerably greater than the sum of its parts. Get down, get involved, and support this great label from Hong Kong.

You can get in touch with Noisoke Records via its Facebook page. Tell ‘em I sent you.