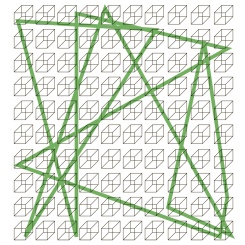 Rattling around in my listening box are these two gems, both involving Saint Petersburg’s Ilia Belorukov. Tri, released on Belorukov’s own Intonema label, stars Belorukov, Kurt Liedwart and the majestic Keith Rowe while Somebody Rattled teams Belorukov and Liedwart with Andrey Popovskiy and came out on Louie Rice’s Hideous Replica label. Both aren’t exactly new releases – Tri dates from late 2014 and Somebody Rattled from earlier this year, but they’re both excellent and well worth investigating.

All Intonema releases are handsome things, and Tri keeps standards up with gorgeously austere squiggle grid cover art. There’s an impressively a moody double performance shot on the insert, which also tells me that the two performances documented here come from the Experimental Sound Gallery in Saint Petersburg in 2013, one with an audience and the second without.

For both pieces, Rowe deploys his usual guitar  and electronics setup, while the other two juggle an array of stuff (there’s a kit list on the release page if you’re interested). Both pieces are engrossing, full of detail and dynamic range, from moments of detailed scuffs and squeaks to full on, multi-layered roars, packed with clangs and hums.

The recording quality is amazing, bringing out every serrated scrape and motorised drone – the first piece (which clocks in at over half an hour) in particular benefits from this hi-fi approach, at times seeming awesomely monolithic as its rough-hewn noise fills the space. Yet, at others, there are moments of almost pastoral drift – at about 23 minutes, for example, where an ominous low-end throb fades out and there’s just a cloudy, engine like buzzing and gently feedback drone.

The second piece is more restrained, with some lovely, gritty guitar mangling and visceral scrapes and buzzes. While it’s not immediately clear who’s doing what, Rowe certainly seems to dominate proceedings, the determinedly physical nature of his sounds – almost painful at times – recognisable from his years of consolidating and refining his aesthetic. If not quite as immediately gripping as the first piece, this second work has an intensity and rigour that rewards close and engaged listening, almost sculptural in its play of presence and space.

And then we come to Somebody Rattled for altogether more sullen slap round the chops. Recorded in the same place as Tri – the Experimental Sound Gallery – and with two out of three players in  common with the Intonema release, it is, nevertheless, a very different beast.

If the presence of Rowe gave Tri a kind of austere Zen majesty – think Samuel Beckett meditating on Ben Nevis –Somebody Rattled is its grumpy introverted nephew. Holden Caulfield taking tea with Painjerk.

The less-than-hifi quality of the cassette adds a layer of almost punk sheen and distortion to the erratic shrieks and demolition derby smashes and crashes that erupt seemingly out of nowhere. It’s thrilling and enervating in a way that Tri, with all of its fidelity and focus, isn’t.

There are even moments of comedy. At one point on Side 1, a snatch of The Supremes’ You Keep Me Hangin’ On wafts out, as if from a transistor radio on a construction site, a ghost in the machines, available now exclusively for use in the matrix.

The spaces and silences that punctuate the grit aren’t airy and reflective, they’re passive aggressive, full of tension, bursting out into jagged blarts of fuzz and static like an elbow in the ribs or a snarled riposte to an offer of a nice walk in the park. (Shout out to the Mums and Dads, yeah?) There are some particularly thrilling moments at the start of Side 2, grainy and caustic, like the worst headache you’ve ever had – although these, unlike those headaches, pass quickly. Even better is a supercool rockout right at the end, where the trio bring the ruckus for final blowout of gnarled transistor heaviness.