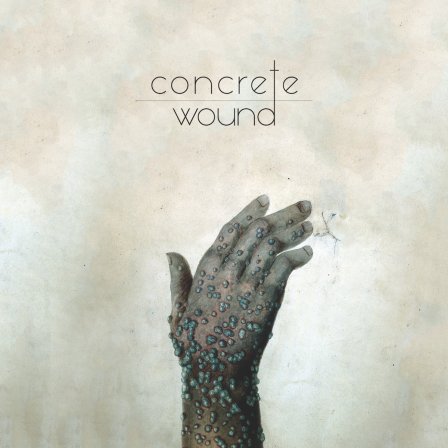 Invisible City Records is a fantastic tape label based in Gateshead. Formed in 2014, it’s another signal from the increasingly vibrant (to this ignorant north Londoner, anyhow) underground scene in the northeast of the UK that ranges from Gateshead to Newcastle to Leeds and everywhere in between. They’ve put out plenty of good stuff over the last 18 months or so, as a glance at their Bandcamp reveals. A Sindre Bjerga release in August was a sold addition to the Bjerga discography, followed up by a pleasingly enigmatic work from Silent Refusal that crushed harp, cello, guitar, organ and various domestic devices into a thick dronescape that verily seems to suck all air from the room as it plays.

But it’s this split from Manchester’s Concrete/Field and Poland’s Wound that is one of the real jewels in the catalogue. Similar enough to be perfectly matched yet different enough to avoid monotony, it’s an inspired pairing, putting impassive drones and snaggle toothed noise against wintry ambient washes and stark synth posturing, with an overall effect that is considerably more than the sum of its parts.

Concrete/Field’s Cathedral kicks things off, with a slow, glassy pulse that reeks of eerie emptiness. At nearly 11 minutes long it’s an impressive beast, gliding through the dark and leaving very little in its wake save for almost inaudible, definitely unidentifiable reverberations. The soundworld initially resembles Elizabeth Veldon’s long form ambient works, like The Frost Is Setting In, or even Eliane Radigue’s Adnos, but after about four minutes, the sonic palette broadens out. Field recordings let in some traces of the physical world, sploshes of water and tweets of birds, before parallel lines of hiss and throb drop into the formation.

The title of the piece is fitting for something that is, after all, quite meditative despite its gloomy overtones, although the echoes are less liturgical, instead recalling LaMonte Young’s long-form contemplations or even Morton Feldman’s Rothko Chapel, the titular location of which is, after all, a cathedral of sorts. The gradual, layered development found herein is move away from recent Concrete/Field recordings – the Brownian motion burbles and mournful noise of the recent Hidden Workings collection and the A Theory of Urban Psychogeography CDr, for example – instead a return to the grey joys of The 50Hz Hum of Power and other early work.

It’s all pretty entertaining anyway, and contains a rather glorious segue into Spirits of the Air, an altogether grumpier beast. This lays down queasy, distorted synth phases that orbit in an unstoppable, dread-filled cycle as bursts of metallic synth junk bash around the perimeter, occasionally strafing the surface with gonzoid laser blasts. Meanwhile, at the edge, an insistent hissy squelch cackles away and the background roar of static ensures that any of our fleshy data hubs are well and truly scrubbed clean. Massive and ugly, it’s as unstoppable as a malignant garbage disposal unit mounted on caterpillar tracks and programmed to devour everything in its path.

Over on the Wound side, the mood is correspondingly bleak. Patterns of Exposure deploys a lurching percussive grid and frosty bleeps to fashion a cold and empty soundscape. Entropy was here, but even that’s gone now. The beats aren’t beats, exactly, more snatches of stony growl chopped into regular intervals, their numbing repetition adding to the inhuman feel. This ain’t no disco.

At first, Heavy Breaths seems like a cooling balm after all of this turmoil. Synths sparkle and twirl as a smooth wash drifts in. At first, it’s all very cool and calm, with long synth chords delivering a satisfyingly new-agey emotive hit, redolent of deep fjords and icy drifts. If the track had stayed this way, it would have been fine, a lovely slab of slo-mo bliss. It’s only after about three minutes that things start to melt and lose shape, with those twirls becoming manic spins and a glitching wave of white noise polluting the smooth surfaces like a corrupted browser window. It’s an inspired move and, even when things seem to right themselves after a brief interlude, it’s actually a deception. Reality has been retooled and in the place of calm reflection we have echoing melodrama, synths slowly crashing together to create a sense of looming, unbearable tension, like a glacier inexorably gouging a path through a narrow river valley. It might take a million years, but it’s gonna happen.