The name is fantastic, isn’t it? A deadpan linguistic nutmeg that, merely by offering up this seemingly common-sense, value-neutral label to the wan daylight highlights its semantic and moral emptiness, its derelict form kept afloat only by sceptic ideological matter rushing in to fill its empty chambers and channels.  The mirror reflects the true horror. Enough political critique to fill an iPod full of wordy protest songs. The sounds, too, could be political, as they, like other practitioners of this style of … music? … refuse to accept conventional commodified forms and ways of thinking. Not to mention the ire embedded in these sclerotic, closely woven blasts.

I don’t, if I’m honest, know much else about Hardworking Families, except for the fact that it’s the project of Tom Bench, who lives either in Brighton or Leeds or possibly both and who has the Twitter handle TJ Dizzle. These two are his first ‘proper’ releases, apparently, but there was also a track featured on Rob Hayler’s brilliant Eye for Detail compilation as well as a ragbag of early works and stuff on his Bandcamp. I hope he’s got a lot more brewing in the pipeline. 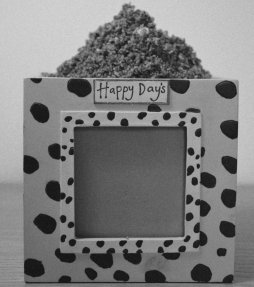 Anyway, I like a nice Beckett reference and so Happy Days suits me down to the ground. That the title also works as a crushing iron bar of … well, irony, in our grim times doesn’t go un-noted either (not to mention The Fonz, right?) All of these allusions swirl and swim in my grey matter as the crabbed vibes of Bench’s 32-minute work gurn out at me, thumbs aloft, as the dark mud ever-so-slowly rises past my jawline. Still smiling. Heyyyyy.

But before all the pulverising wire wool fuzz kicks in, there’s an extended intro passage of bleak calm. A guitar picks out a plaintive, two-note refrain (or are they strangely tuned bells?) . It’s empty and melancholy, a lonely tolling in an abandoned village, long after everyone’s left to escape the slowly rising floodwaters. That fuzz keeps on coming, its dirty, gritty power slowly overcoming all obstacles to drown out everything else.  At around the halfway point, the soft edged grime is blasted by scorching beams of laser drone, scarring the surface noise like a hot skewer laid across a pat of butter. Right at the end that two-note refrain reappears, a pathetic mewling amongst the ruins. Oh, this is a happy day.

Out on Don’t Drone Alone – its inaugural release, in fact – Worse Than A Stranger presents two long tracks, recorded in London, Brighton and Sheffield, with rather groovy artwork inside and out.  Both pieces are very different, the A-side a piercing tone drill and its companion a warmer, reverberant stew possibly fleshed out with field recording hubbub.

That A side – Bryantwood Road, Washington Street, if you’re cute for titles – is a disconcerting listen, matching the alienated blankness of minimal computer music with the sullen focus of the most passive-aggressive electroacoustic noise-improv. Silver tentacles of pylon hum stretch out in a foggy electric burr, like an eight-armed dentist drill. At first, the tone is translucent and glowing but soon shifting to an opaque and plastic glower, with a low end fit to rattle the fillings in your jaw. The fear of the chair. A cavity, sir? Well, we mustn’t dawdle. Nurse! The gas!

Meanwhile, on the first section of Paternoster, on the other side, clusters of dull thuds are soundtracked by the not quite intelligible sounds of humans in conversation, the whole thing echoing as if it were recorded in an underpass. It’s curiously lacking in tension or foreboding, but it just sounds … odd, as if there’s something strange happening that my senses can make out only obliquely. Not so much uncanny valley, as mysterious subway. It opens out after a bit, becoming less muffled, with the bass throb dropping away and replaced by furious close-mic’d scraping and short bursts of percussive tapping. Those bursts are looped, or repeated obsessively, all the time with the chatter of conversation and growls of traffic in the background. Some kind of language, perhaps? It would be infuriating if it weren’t so intriguing.  Keep going. I’m listening. I can hear you.