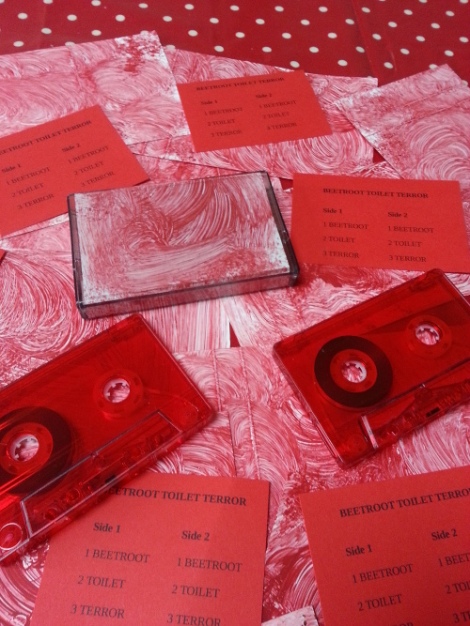 A series of vivid gastric power ballads from the japester crew of, as I understand it, Neil Campbell and KEK-W. The lavatorial equivalent of a pavement pizza burped up for your listening pleasure, this is Soft Cell crossed with Ottolenghi, the rouge ooze of the titular vegetable casting a suitably gran guignol melodrama over its lumpy terrain. The laxative effect of all that fibre has served up six burbling tracks over two sides, with pairs of tunes sharing common titles, BEETROOT, TOILET and TERROR the dunderheaded lack of imagination twisted into a kind of joyful puerility at the thick wodge of acid reflux jettisoned here.

Side 1 – at least I assume it’s Side 1, it’s the side with BETROOT TOILET scrawled on it – kicks off with scruffy, shuffling electropop, the impassive plops and snaps of its drum machine acting as a rather smart buoyancy aid for the grunting bass ostinato, layers of loping synth and phasing ambient whooshes. That all slowly works its way up to a rhythm that’s like a giant clockwork juicer working its way through a conveyor belt of root vegetables, before morphing into a beatless, cavernous ambience. It’s all prickly tension and dread, not dissimilar to those guys in Hansa Studios doing their thing. After the smoothie, the horror. We could have beetroot. Just for one day.

On the flipside, things get nocturnal and groovy. It’s unexpectedly sombre, a lost Hyperdub cut from five years ago. The synths channel that spooky night bus comedown dread, and the beats are halfstep, hissing, malevolent. It seems a universe away from the schlock comedy of the cover art, although when a staticky lurch and saw toothed bass loop fades in around halfway through the ‘TERROR’ bit certainly starts to make sense. Our mysterious guides keep changing things up, however, with a rising/falling siren drone, spectral knockings and out-there burblings that combine into a tangle of retro-goth-Vangelis sob-horror. Nice work, you two. Up next: Carrot Shed Allotment Trauma?

Get thee to the salad bar