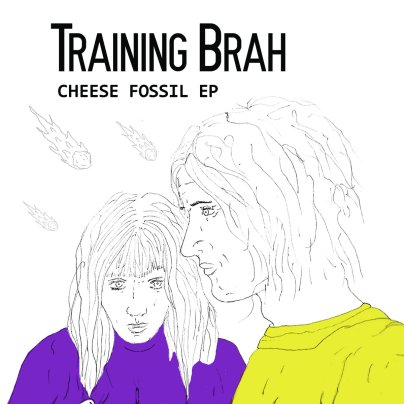 This slice of scruffy postpunk pop, from Cape Town duo Dolf Baker and Joy Smith, would be a little too polite for me if weren’t for Smith’s shrieking caterwauled vocals. Somewhere between the angsty howl of Perfect Pussy’s  Meredith Graves and the cut-you-dead sneer of The Slits’ Ari Up, across these three tracks Smith sounds bored, disdainful and righteously pissed off in turn. While the rest of the instrumentation is bone dry and crunchy, Smith swathes her yowls in reverb,  as if she is addressing us from some cavern hidden deep in the heart of the mountain.

While there’s enough going on to hold the attention, if I’m honest, it’s not ’til the final track, Come On Comet! that the band really hits their stride. A scratchy Bad Moon Rising guitar squall carves out a minimal chord progression as it locks into the echoey halfstep drums, Smith’s affectless vocals channelling Kim Gordon doing karoake to The Ronettes in a basement. “Hey Comet! Come and destroy me,” she groans, less an invitation than a challenge. But you wouldn’t have a chance, even if you wanted to. The rhythmic switchup halfway through gives it a bit of welcome oomph, too, sprinkling a little bit of ferric toughness over its crinkly tinfoil texture.

The other couple of tracks are plenty spiky too, with the choppy chords and steadfast drumming of Space Yeast making for a nice head nodder, Baker’s submerged backing vocals softening Smith’s snarls and its repetitive structure casting a grimy, hypnotic spell. Girl Germs is more polemical, I suspect, judging from the title, with the tune’s garage rock meets British Invasion vibe laying down a nice punkish thrill, and the excessive cymbal deployment only adding to the sense of occasion. More paint stripper, vicar?