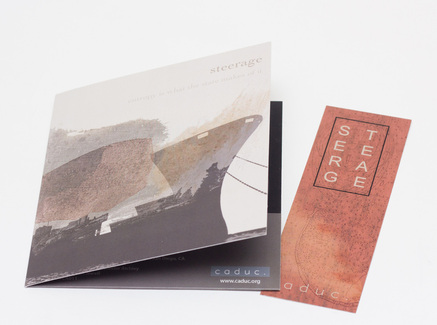 Deep drone ragas from the duo of Alan Jones and Barry Chabala, with an almost choral feel at times, despite there being no vocals involved. Instead, there are guitars and sine tones, sometimes coursing through parallel lines, other times intertwining in slow, melancholic arcs. The four pieces here have a definite emotional hit, despite their often minimal construction – less is, indeed, more in this case – with the muted hums and gradual upward slides marking ebbs and flows that could almost be tidal.

On opener The Predominance of Fading Decorum, much of the expressive work is handled by a series of numinous, sustained guitar lines, set against a background of silvery drones and metallic jangles (perhaps the result of some behind-the-bridge jiggery pokery). They’re downright melodic, and bring to mind some of the prettier guitar loops of Fripp and Eno’s Evening Star. The last few moments are particularly beautiful, like the songs of already-dead stars calling out to us from across millions of light years away.

I’m becoming quite a fan of Jones’s work. He has an attention to detail that makes for fine-grained work that keeps me coming back to it even after multiple plays. It helps that he knows his technical onions, having run a mastering business (Laminal Audio folks, check it out here) and has handled the mastering for a bunch of records that I’ve enjoyed getting into my brain over the past few years – Grisha Shakhnes’ Distance and Decay, Steve Flato’s Mara’s Daughters and Exhaust System, his own Rearward Through Forgetfulness, and so on.

Jones’s own work is often much less humanist than this record, however. His collaboration with Derek Rogers, Repetend, Parallax, was marvellously austere, a series of dispatches from a malignant machine subculture where electricity had attained a kind of merciless sentience. I really like that aspect of his work, and it’s interesting to see similar tendencies here wrestling with a more warm-blooded dynamic. Whether this a result of Chabala’s influence, or whether it’s from both of them, isn’t immediately obvious. But the results are splendid. Upon Maelstroms of Unbearable Reality, for example, has a kind of echoing, almost widescreen quality. The resonant chimes, tense electronic drones and minimal guitar picks of its opening section are almost oppressive enough to soundtrack a low-budget horror flick, all wrecked cabins in the woods and melted faces staring out of the dark. But the duo step away from full-on emotional manipulation, rather smartly I think, with a whirlpool of cloudy dissonance scudding across the final third that pushes empathy away in place of an alienated, locked-in vibe.

Chabala, of course, has a varied discography – Another Timbre’s unbalanced in (unbalanced out) is a favourite – and, although he brings an awareness of rock’s dynamic to his playing (‘influenced as much by Jimmy Page as he is by Derek Bailey,’ says one biog), he’s adept at keeping this and his more avant tendencies in fruitful balance. On the epic Entropy, the human and the machine are replayed to dramatic effect. For the first six or seven minutes, all we have is an almost absent burr, its low-key drill whine occasionally touching off hollow moans of feedback. It’s impassive, deadpan, and lulls us into a kind of fugue state. So when Chabala’s molten guitar line whips across the surface of the track, at just before eight minutes, it’s a shock, a sudden, searing rod of white light illuminating a darkened fog. But that sustain also creates a sense of stasis, a moment of rock singularity hanging motionless in space. The string-bent solo caught in the camera eye. The filth and the fury etched into the history’s hard drive for the rest of time. That it passes relatively quickly doesn’t matter – it simply adds to the feeling of paradox, a Yngwie Malmsteen statue glimpsed momentarily from a window during a train ride through some anonymous European country.

Finally, A Faculty of Encounter plunges us into the ocean’s blue-black depths with its constellation of whale-moans set upon a sibilant tidal backdrop. But that new age chillaxation is well and truly mucked up by the cut-in of a high blood pressure throb and its attendant no-input style squeal. Their disconcerting frequencies are upped by cavalier panning that makes me feel as if I’m trying to maintain my balance on board a container ship getting the worst of a storm just out of Rotterdam. Things look grim for us, to be honest, although below the surface all is glistening calm. And while I’ve no idea what’s in the hold – those containers are sealed boyo – they sure look pretty heading down towards Davey Jones’ locker.