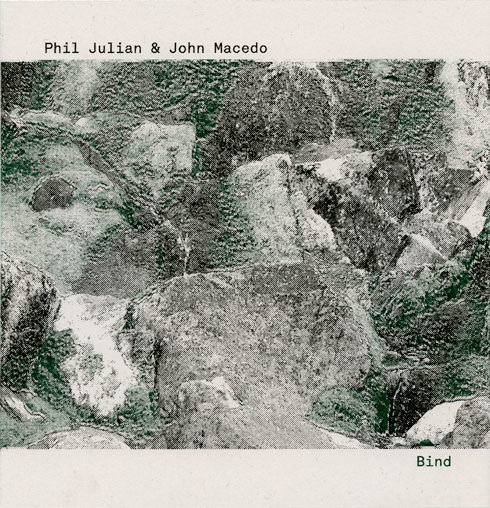 This collab between two champs of the London electro-noise-gubbins scene has been a while coming, as evidenced by the rather wry sleeve note: ‘Recorded at various locations in South East London, 2013-16’. But it’s worth the wait, as this concise suite of pieces have a force and precision that cut through much of other staticky garble that’s crowding up my inbox at the moment. Bind proves that you don’t need to bloat out your recordings with lengthy gristle jams to pack a punch. These 11 tracks are short-ish but particularly well formed, with pieces like Simple Moves and  Cinnery 1 folding in the glossy, planar surfaces of computer music with the typical modular synth enthusiast’s polyhedral sonics and percussive jolts to create condensed, many-faceted aural sculptures. Silvery alien chatter rubs up against shortwave whistle and skulking throb. Grumpy burps of noise dissolve suddenly into scorching  high-voltage blisters.

That these aren’t – I don’t think  – live recordings helps, of course (for that check out the duo’s Live at Cafe Oto tape, on HR’s sister label, Wasted Capital Since 2013). Freed of the responsibility to constantly think on their feet – liberating for certain practitioners but not always particularly great for electronicistics for whom the careful build up in tranquillity tends to yield more illuminating results – the pair are able to pack a whole lot of detail into their compositions. Connate is great early example, its spluttering fizz switching into a kind of motorised coughing that’s remiscent of a Whacky Races soundtrack album. These are pieces that are often more rewarding viewed vertically – focusing in on the sometimes mystifying constituent parts that lock together at any one point in time, as on the hectic quiet-loud thrash and throb of Enhanced Odds, or the clockwork dub of Together – rather than relaxing into a well-tried path of linear progression. Finally, in an album of surreally inspired track names, Another Burden on the National grid takes the disco biscuit, its low powered locked-groove stutter adding extra deadpan notes to the already lol-tastic moves.