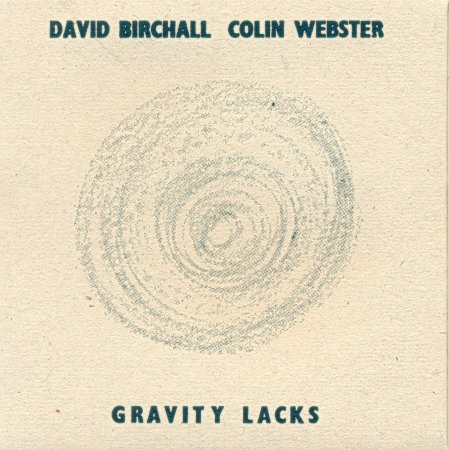 This second release in the burgeoning Vernacular Records’ discography continues the label’s run of uncompromising free improvisation. You get a track each of Webster and Birchall solo, and then a couple of duets – one short (ish) and the other longer – all delivered with a brutal efficiency that leaves the listener punch drunk and dazed, wondering where the next sonic uppercut is coming from. The pair are no strangers to We Need No Swords but I’m not sure whether I’ve heard them together in this configuration – although a blistering quartet set in the basement of the Hundred Years’ Gallery last summer, with Andrew Cheetham and Otto Wilberg the other two names on the team sheet, refuses to fade from my frontal lobes.

Here, too, both players are in blazing form, with  all of the music coming from a single live date, at the Long White Cloud gallery in Hackney in May last year. Webster’s solo is an abrasive, immersive attack, moving from brassy whooshes of air through wasp-swarm growls to elongated melancholic howls. It’s a more extroverted performance than the bitten, mouthy clicks and snarls of Antennae, his solo release from a couple of years back and the grittiness of his sax & turntable duo with Graham Dunning. Here, his long tones occasionally verge on a John Butcher-like metallic abrasion, but even as he pushes out those gargantuan streams of breath, Webster can’t help mussing them up, his clicks and snaps adding serrated edges to the smooth expanses of tone, adding texture and depth to what might otherwise be cerebral abstraction. That said, I’m a fan of this type of stuff – the further out the better – but even to these less than impartial ears, these almost-corroded, near-monolithic barrages are some of the best things I’ve heard Webster play.

Birchall, meanwhile, brings a bloody-minded, almost obsessional, focus to his solo set. He’s  developed a unique and idiosyncratic language for his playing that merges brute physicality with a kind of shimmering, fuzzy elegance. I’ve only seen him perform once (the aforementioned quartet) and I couldn’t really see what he was doing, so I’m not entirely clear how Birchall achieves the gluey, shining splinters of sound that are the hallmarks of his technique, but I like it. The methodology seems to combine frenzied rubbing  with a gritted-teeth forcing of the plectrum between the strings, a kind of obstinate incantation to awake spirits that have lay dormant in his instrument until now. Above all that, however, there’s a torrent of glassy, ringing notes that flutter around the high end, their overlapping, jostling plinks like a dolls-house full of miniature crockery tumbling through a typhoon. There’s nothing a conventional guitar teacher would recognise and that’s all to the good.

Put these two together and you have a positively unholy row. The first duet is a noisy stormer, at times recalling the murky chaos of those early Brötzmann ensembles, Birchall sweeping a curtain of scuzzed out noise across the whole scene as Webster grumpily punches holes through the din. There is, of course, a tendency in these types of situation for each player to retreat into their solipsism and jam out a crowd-pleasing full-spectrum howl. That’s not quite the score here, although neither is it smug mutual adoration. It’s more like a perpetual advance and retreat, with neither player ever gaining the upper hand yet both seeming satisfied with irregular, abrasive interventions rather than all-out dominance. There’s an early moment of rapture about three minutes in, Webster’s restless buzzes merging with Birchall’s crazed scrunch for a glorious tide of fuzzy wailing whose bellicose density belies the relatively few personnel responsible for the racket. It’s a nice contrast with the freezing fog that sets in two-thirds of the way through, Webster’s eerie hoots twisting between an oily slick of guitar drone.

The second duo is a more restrained affair, Webster and Birchall taking a granular, reductionist approach to create a tapestry of sibilant hisses and messy rattles that brings to mind Adam Bohman wrestling with a giant balloon sculpture. It’s a lovely swerve into detail for the duo after the tumult of the previous piece, preventing them (and us) from simply riding the energies released until they dissipate. The filth and the fury may be corralled into narrow vessels but the power still emanates.