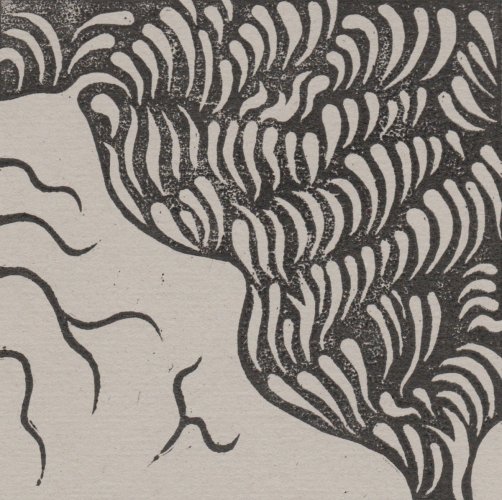 This is actually Dirk Serries’ first album of solo guitar improvisations, although you wouldn’t think it given the assurance and aggression that he marshals across its eleven tracks. He’s not a complete newbie to this stuff, having joined jazz blasters Yodok in 2013 alongside tuba player Kristoffer Lo and drummer Tomas Järmyr and played in various other ensembles from around the same time. I think I first heard him belching out clouds of scorching guitar fire as part of the Dikeman / Serries / Webster / Lisle quartet’s Live at Café Oto release (also on Raw Tonk) where his ability to carve out his own blackened spaces within the ongoing barrage of tenor, baritone and drums was impressive and unignorable. Take Dikeman’s horn away and you’re left with Kodian Trio, whose I (Tonefloat) and recent Live at Paradox (Raw Tonk) also feature Serries and are also essential listening.

Still, Serries has come to free improvisation relatively late, having worked since the late 90s as a predominantly electronic artist, putting out stuff with various degrees of abrasion and ambience under various aliases (Vidna Obmama, 3 Seconds of Air and Microphonics are three of his most well-known pseudonyms). I can’t help thinking that this training has given him an intuitive sense of space and dynamics that has served him well as he’s immersed himself in this different area of activity. Sweet Ruin, Etched On The Bow Grip’s opening track, is a fine example, its guttural, scraping extended techniques creating an rusting behemoth with nary a power chord to be heard.

And even if the spectre of Derek Bailey hangs over anything that’s concerned with  free improvisation on the guitar, Serries faces this anxiety of influence head on, with a dedication to the Sheffield master on the album sleeve, before swerving away from those archetypical, prickly forms to create something with its own charred and idiosyncratic character. There are still recognisable Bailey-esque moments – witness the flayed skin fuzz of This Brutal Vortex and sharp cuts of Clusters Bleed, Serries turning the latter track from what could easily have been a rather pedestrian slice of fuzzed up fret-bothering into something that writhes with malignant energy. Indeed, throughout the album, Serries’ irascible, juddering attack  on pieces liked Diffused Wire Appliance, with its clotted scrunch and Rowe-like gobbets of radio noise, is a pertinent reminder that improvisation is sometimes at its best when it’s bloody-minded.

In any case, Serries leavens the free improv stew with a fair of dollop of avant-rock overload, fully cognizant of the power of feedback and sustained chordage to bring forth seismic disturbance. Assert Total Illusory Curve’s cracked harmonics and muffled yowl channel Weld-era Crazy Horse doggedly pushing through another 25 minute psychic meltdown jam (perhaps Arc, its noise collage sister is a better comparison). Futility Wrath Allegory is even better, its staccato histrionics evoking Young at his most ravaged, Serries tearing ragged chunks of noise out of his instrument like the devil ripping a soul out of some poor unbeliever. What a killer.