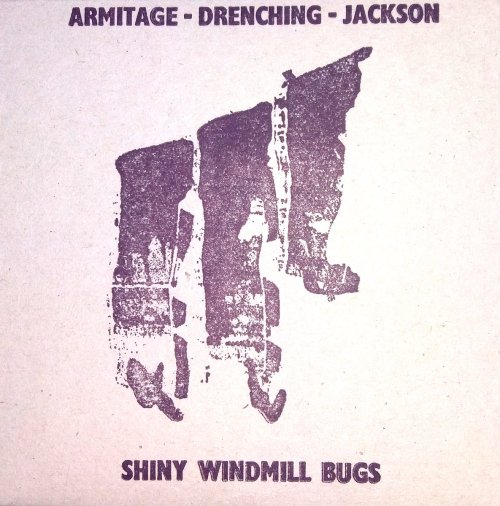 Shiny Windmill Bugs is the third release on David Birchall’s Vernacular Recordings, continuing that label’s exploration of the lesser-trod paths of free improvisation with this set by the sax-vocal-toys-whistles-objects-percussion-whatever trio of Dave Jackson, Kate Armitage and THF Drenching. Taken from a show in St. Margaret’s Church, Manchester, from April 2016, it is, I think, only the second appearance of these three together on disc, following Kwark Kwark, recorded a few weeks earlier and available as a name-your-price download from Dave Jackson’s Bandcamp. (Drenching and Armitage have worked together frequently, however, most recently on Clock and Beak, released last month on Drenching’s own label, Council of Drent).

Kwark Kwark is a longer and more abrasive beast than the restless fidgets of Shiny Windmill Bugs, its more hostile tone perhaps due to the trio going all out from the get-go, producing an inchoate blart of prickly noise that’s admirable but also difficult to love. Shiny Windmill Bugs, in contrast, releases its charms easier. A quirky, slightly inconsistent affair, it occasionally sounds like a shopping trolley full of broken electrical equipment being dragged around a junkyard, other times evoking a ragged choir of household pets. Both of these are good things, by the way, and the set’s crumpled disjointedness only adds to its rusted charm. The trio’s Dadaist slapstick aesthetic is never far from the surface, and their nervy jousts and unexpected toots add a dynamic abruptness to the ebb and flow without ever degenerating into panto-time parps and pratfalls. I particularly like the section about eleven minutes in, when a series of increasingly querulous vocal cools are echoed by a series of hoots and whistles, before descending into a grizzly bed of scrapes and crackles. At the same time, weirdly rubbery and distorted tones creep up, accompanied by odd notes of what could be a clarinet and, possibly, a slide whistle. It carries in on a similar-yet-different vein for another 10 minutes or so, but trying to get any kind of purchase on the sonics at play is tricky. It’s hard enough to figure out what’s making all these sounds, for one thing, and then as soon as you focus your ear on any single element it changes, swirling away into the silty mulch, as difficult as trying to grab a minnow in muddy pool. Far better to give yourself up to the kaleidoscopic heave – indeed this commitment to the protean, constantly morphing swirl of improvisation is, ultimately, what transforms Shiny Windmill Bugs from a bunch of people messing around in a room into something far more enigmatic, challenging and, ultimately, rewarding.