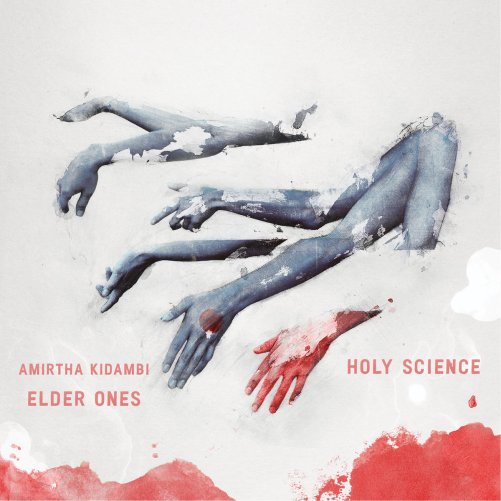 Key to Holy Science’s success are Kidambi’s whirling vocal mantras, wordless yet capable of transmitting an astounding sonic and emotional variety. Her singular take on vocal improvisation draws on the south Indian devotional singing she grew up with, her training in the ‘classical’ avant-garde (Stockhausen, Nono etc) and her experience working with composer and saxophonist Darius Jones. Kidambi’s stunningly fluid technique enables her to draw on all of those elements in an ongoing flux of spontaneous creation, the cascade of shrieks, groans, coos and vowelly lyrical exhalations evoking wide-eyed wonder through haunted melancholy to intoxicated frenzy, occasionally in the course of a single track. For ignoramuses like me, not steeped in the Carnatic tradition, the effect is, nevertheless striking and mesmeric. Imagine Elizabeth Frazer from The Cocteau Twins journeying to Uttar Pradesh to immerse herself in bhajans before hanging out with Pharaoh Sanders to cut a long-lost companion piece to Karma on some other astral plane. Kidambi really is that good. That she is usually laying down some righteous harmonium drones at the same time, adding a gravelly low-end that contrasts beautifully with Lopez and Jaffe’s questing rhythm section, only emphasises the focus and concentration that she brings to every moment of this marvellous record.

If this all sounds like some charming Sunday morning chillax music to get you through a hangover, you’d only be half right. True, Holy Science’s meditative canvas is set for maximum immersion, but it has fire in its heart. The blazing jam of Dvapara Yoga is dedicated to the memory of Eric Garner, and its move from stately lament to righteous indignation packs a tough emotion punch, with the near-suffocating overload of its final third only emphasizing the horror and tragedy of Garner’s demise. There’s no transcendence here, just fury – although those listeners who find the lack of consolation a little overwhelming may be heartened by the fact that Holy Science is based around the Hindu cycle of cosmic time, with the four tracks exploring creation, destruction, and rebirth respectively. So there’s hope amid the desperation, kind of.

Holy Science may place Kidambi front and centre, but the rest of the band are no slouches, either. Lopez and Jaffe bring superb polyrhythmic edginess to cuts like Treta-Yuga, laying down an insouciant loping beat that recalls David Bowie’s Lazarus as Nelson and Kidambi trade circling riffs before switching into a more abstract realm, Lopez’s bass runs doubling the undulating harmonium line and Jaffe’s snare punctuating the vocal and sax cries like cannon retorts. Nelson’s soprano also proves a more than adequate sparring partner. A member of Battle Trance and Merrill Garbus’s tUnE-yArDs band, Nelson’s also a skilled improviser in his own right (see 2014’s Lower Bottoms for a taste of Nelson flying solo). He’s no grandstander, however, instead coming correct with just what’s needed, whether tracing Kidambi’s vocal lines with his horn, as on Sathya-Yuga, like two circling starlings in a cloudless sky or blasting off in a different direction entirely, as in the freak-out skronk at the apocalyptic climax of Kali-Yuga. This section is vocal-less, allowing Nelson to blast out in scorching, reedy arcs as harmonium, drums and double bass create a heavy cacophony that mirrors the end of time itself, before an abrupt cut to silence. In the Hindu mythology on which Holy Science is based, this final blowout is followed by a return to the start of the cycle, which may or may not be a comfort. Has this all happened before and will happen again? Are we destined merely to repeat all of the mistakes we’ve made before? Or are we given an opportunity to trace a different path through the ages each time? Who knows, but in the meantime the Elder Ones are here to guide us though the labyrinth of history.