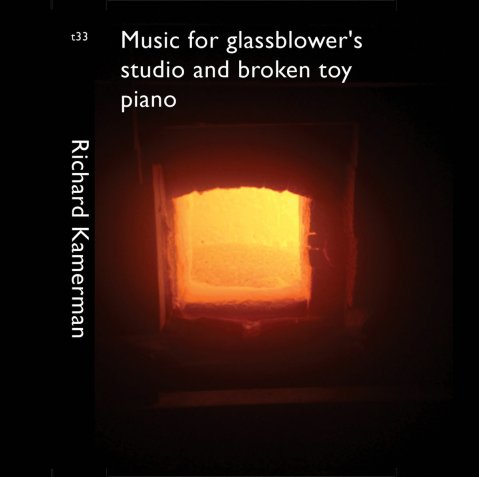 It is, as several other reviewers have noted, music for a glassblower’s studio, not music from it. Even before we hear the contents, we’re invited to be sceptical about the relationship of the sounds contained on this tape and any external reality, that sleight of hand required when listening to other pieces – field recordings, mainly – that claim fidelity to a specific place or time. And what’s the broken toy piano got to do with it? Could Kammerman be any more arbitrary in his juxtapositions? Music for factory and discarded teddy bear, perhaps? For airport and battered pencil case?

The mystification continues as we listen to the two cuts offered up here. Both contain slices of airy sonics, filled with the clatters and bangs one might reasonably expect to hear in a facility dedicated to forming glass objects. Indeed, a residual background thrum has a remarkable resemblance to a furnace’s huffy roar. Sounds from a glassblowing studio, then? Are you having a laugh? Well, as much as I’d like to think there is some prankster vibe going on here, I’m certain Kammerman’s intent is both serious and melancholy. This pair of meticulously stitched-together pieces draw us into their world so completely that it’s easy to forget we’re in an imaginary space – that old field recording con trick, with the emphasis on fidelity and scrupulous withdrawal of authorial presence. In contrast, Kammerman foregrounds artificiality even as he creates this absorbingly false environment. Listening to the rackety clunks and thunks of For Any/One Thing, with its background radio buzz (surely a nod to Keith Rowe?), it’s impossible not to be totally mesmerised by the industrial-sounding goings-on, even if we have no idea what’s taking place and where and when it’s happening. We are the camera eye (the microphone ear?) creeping into a secret space, at one with the environment yet totally apart from it.

Yet it’s with the 15-minute bricolage of The Body Part that Kammerman tests our suspension of disbelief. The broken toy piano of the title makes its presence felt early on, Kammerman playing a series of tentative, melodic fragments that have an almost pathetic beauty (think of El Indio’s pocket watch chimes from For A Few Dollars More) before a wave of soft white noise ushers in what could be another repurposed field recording. This time, however, the hustle and bustle of labour is almost entirely absent, replace by electrical spits and rustles, the odd spurt of radio and occasional reappearances from the toy piano. Heard immediately after the humanist tapestry of For Any/One Thing, the mood is almost unbearably melancholy, like walking through a deserted factory long after its closure, the machines dismantled and the workforce laid off. And perhaps this is why the choice of glassblowing makes perfect sense for these compositions. Part industry, part craft, glass blowing works at a human scale, harnessing blazing heat and basic technology to create objects of great beauty and utility. And then there’s the impossibility of glass itself. Liquid sand which then cools to become clear? How did that happen? Like Kammerman’s recordings, glass and the studios that create it are hybrids, neither one thing nor the other. And, just like the cassette format on which Music for glassblower’s studio and broken toy piano is released, glassblowing studios are almost extinct, replaced by large scale industrial manufacture and remaining only as niche curiosities. It is this loss which haunts Kammerman’s compositions, but which also gives them their peculiar heft and physicality. These spectral, ambiguous soundscapes may be summoning worlds that no longer exist, that may never have existed, even. But they are worlds that enchant us nevertheless.