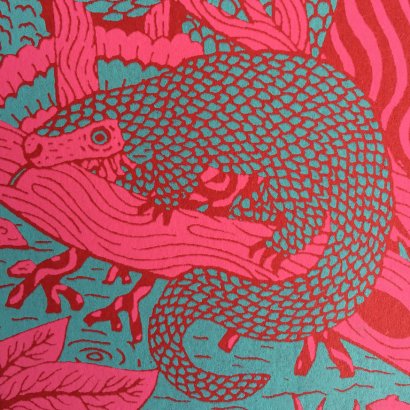 Colour Discolour is one of a brace of recent releases from the excellent Eiderdown Sounds label aiming to reinvigorate the often staid gestures of psychedelia. Its companion piece, Bird People’s Down Of The Hamsa, cleaved to psych’s ruminative strain with a set of ritual drone mantras full of esoteric wonder. Colour Discolour, in contrast, offers up something queasier and more disconcerting. Melding hectic shredding with blurred electronic radiance, it has a madcap intensity that steers clear of druggy silliness, instead peeling back the fried edges of the trip’s hysteria to reveal the abyss beneath. It’s slightly less melodramatic than Blanchard’s stomping central Asian vibes of last year’s Shade, but the suggestion of an unholy terror lurking at the edges of vision are still present, imbuing what may otherwise have been a beatific blandness with a stranger core.

The mighty 19-minute lurch of Distant Migration is the most similar to those previous cuts, its opening salvo of pattering hand drum and shaker giving way to a deep cumin-flavoured swirl, its basic two-chord chassis scattered with globs of synth gloop. A meandering lead guitar line picks out a few Arabic-sounding scales as it tries to recover a submerged memory of seeing Roger McGuinn banging out yet another version of Eight Miles High in a midlands folk club a couple of decades ago. It works itself up into a righteous dust-storm of a jam, Blanchard hitting the fuzz pedal about halfway through and splicing in some groovy double-time picking that flits around the guitar like a mesh of golden thread and pushes things out into maximum derangement.

Although I would have put my M&S Cardigan on the fact that Blanchard gives the Saz a starring role in Colour Discolour’s opening track, Pigment I, I have it on good authority that it is, in fact, a Shahi Baaja –  a type of Indian electric zither. He layers that instrument’s metallic tang underneath layers of effects, giving it a groovy fizz reminiscent of Krzysztof Hładowski’s Saz shredding with The Family Elan. Blanchard turns away from the Family’s group freakout, however, in favour of the hectic solipsism of the bedroom stringman. Ceding control from his frontal lobes, Blanchard lets his fingers do the talking in an extending series of circling solos whose lack of interest in linear time or audience patience is, quite frankly, endearing. All you can do is follow him down the rabbit hole. It’s a nice place to be.

Nestling between these two tracks, the freezing-cold electronic deliberations of The Witches Horse Block may seem, at first, little more than palette cleanser. Its polished surfaces and unearthly metallic swishes soon mark it out as an interesting diversion, however, with the million-metre stare of those classic Tangerine Dream tracks but with admirable concision. The deep void immersion is compelling. Five minutes spent in its company starts to feel like a pilgrimage from an early Ballard novel: we think we’re journeying to some distant place, but really we know full well that we’re heading deep into the ancient pathways of our own subconscious.