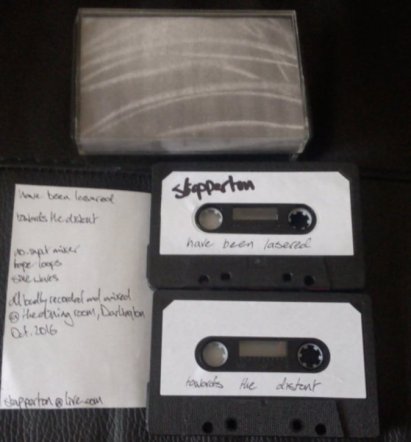 This super-limited tape was produced for giveaway / trade at the Tusk festival and contains two five-minute meditations created from no-input mixer, sine waves and tape loops. ‘All badly recorded and mixed at the dining room, Darlington’, proclaims the handwritten sleeve notes, which may well point to these recordings having a domestic provenance, unless there’s a no-audience underground-friendly venue in that town immune to Dr. Google’s gentle probing. And that’s all to the good, anyhow, adding more lo-fi cachet to this desirable artefact, whose sonics deploy a scorched-earth assault sufficient to reduce the Home Counties to charred oblivion in the manner of H.G. Wells’ three-legged marauders in The War of the Worlds.

Indeed, Jeff Wayne would have been better off dispensing with the prog philharmonia that smothered his adaptation of the novel in hi-fi gloop and commissioning Stapperton to produce some suitably oppressive tones instead. Wayne would have had to invent a time machine first, of course, but it’s a beautiful idea nevertheless. Have a listen to Have Been Lasered for proof of concept, its keening sine-tone wail ensuring that form and content align with Wells’s steampunk vision perfectly. Even better, underneath that kazoo-like whine is a chassis of crunching heave that sidles away from computer music classicism, grounding it in a muddy, ominous loam.

Towards The Distant takes things down a couple of notches, with a gauzy drone that’s about as welcoming as a circular saw at a knitting circle. Plenty malignant it is, but with an eerily organic feel, thanks to the breath-like huff of the tape scuzz mouldering at the bottom of the mix. Listening to these corrosive  soundwaves, it’s way too easy to imagine a hunting party of tripods sifting through the embers for the last lingering traces of human. If these toasters find you, you’d better make your peace with the eternal. Because you’re done.