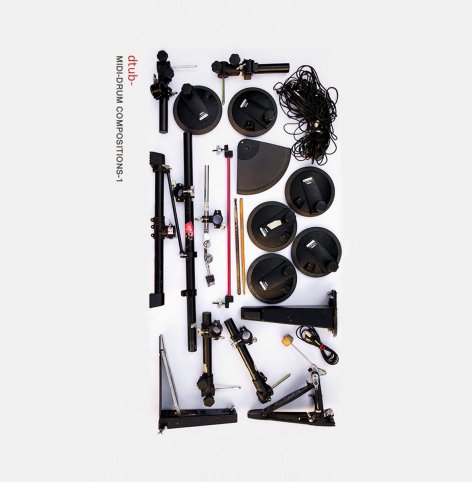 Dtub’s electronic music makes you want to put on your best shoes, dig out those smart trousers you bought for your cousin’s wedding last year and head out for that place in town with the draconian door policy and all killer deep house playlist. Even if, like me, you haven’t visited a nightclub in a good many years, these grooves are limber enough to get you bogling around the kitchen in the mid-afternoon like you were bouncing around Shoom in a feather boa while Danny Rambling cues up another Ten City banger.

The nine cuts on MIDI-Drum Compositions-1 set up a telepathic link back to classic-era house music, with their on-point BPMs, rubbery baselines and staccato keyboard jabs. To listen to  a track like Pump 1989 is to step into a time machine, allowing the trippy mesmerism of its repetitions to work their ravey magic all over again, the disembodied vocal samples echoing over that clangy piano lick like ghosts slipping through a crowded dancefloor. And Bubble Freak, with its slurred ‘Street Knowledge’ refrain casts just the right level of intoxicated discombobulation, that old 7am dislocation that elevates a night out on the town into a holiday in another dimension.

Brilliant, then that these tracks aren’t the result of a chappie in an expensive t-shirt clicking frantically on his MacBook. Instead Dtub – aka Jaxson Payne – hooked an electronic drum kit up to a bank of custom samples and laid down these compositions in real time, with no overdubs or loops or backing tapes. Payne’s approach offers a new perspective on the old human-machine synthesis of electronic music, adding a physicality and responsiveness to the regular cut and paste grids governing these genres. Imagine if Steven Norris had started New Order as a solo project after Ian Curtis shuffled off this mortal coil, using his frenetic all-over-the-kit drumming style to jam out The Perfect Kiss and Shellshock by himself, instead of having to deal with those other chancers.

True, Payne’s effects are subtle – he’s not twisting the Chicago and Detroit silhouette into wild free jazz tessellations, after all. He keeps things locked on. But once you know his technique, it’s impossible not to get a sense of human reflex and intuition at work in the way these grooves balance four-to-the-floor stepping with a quirky placement of sounds and samples, an almost improvisatory feeling of exploration that you wouldn’t get from shifting things around in Ableton. Listen to the madcap percussion swarm at the start of Warehouse Jam, weaving its odd textures all over the regular kickdrum chassis, before making way for clusters of off-centre synth blurts and lazerbeam spits. It’s definitely danceable, but it’s kind of …odd too, with just a hint of the kitchen sink. Ultimately that disjunction, the tension between Payne’s commitment to forward pulsation and his temptation for sonic overload, is what makes this tape so much fun. Perfecto.