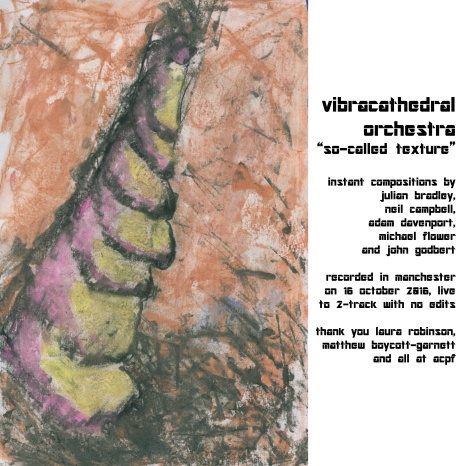 For a while, I thought Vibracathedral Orchestra had drifted away from us, the centrifugal force generated from their ethno-drone swirl dissipated by the orbital pull of solo projects and spin-offs. Or maybe I just lost track, probably somewhere around 2010 when the triple whammy of Smoke Song, Joko Baya and The Secret Base marked a high point in the group’s discography even as that first decade and half of activity seemed to settle into a natural lull, a receding glacier leaving behind a moraine of CD-rs, records, tapes and shows testifying to the genius of their queasy, intoxicated shimmer.

Yet a mere four years later, they reappeared on my radar, like a transmission from a long-dormant satellite blinking back into life. Rec-Rehr was followed by a split with Death Shanties, while 2015 saw the release of the amazing Rec Blast Motorbike and Unnatural With Pain-Relief, the group serving up the usual slices of bowed, plucked, strummed and culture mashed goo as if they’d never been anyway. Now So-Called Texture is the latest missive from this second wind, dropped with little fanfare in their favoured CD-r format but also marking an initial foray into the ever-growing universe of Bandcamp. And if that online presence drives another nail into the coffin of a hermetic underground that’s more secret clique than a collaborative, nurturing scene, well I think David Keenan is only the person whose nose will be out of joint. After all, VCO on Bandcamp means more VCO for everyone, right? And avant-postal freaks craving old-school connection still have Lee Stokoe’s Culver as one of the final refuseniks of the globally-connected sonic weirdo fringe.

So-Called Texture racks up four chunks of overloaded naustronica, its jostling cacophony a rousing new print from the venerable VCO template. Most of your required elements are present and correct from the off, with a clanging cymbal choral and electro-siren whoop announcing the single-note mantra of Part 1. Its blurred-round-the-edges proclamation comes on like some droog commune procession across Ilkley Moor, mixing devotion and hedonism in a slurred mousse of noise. Join us and lose yourself, seems to be the message.

The ‘instant compositions’ presented here were laid down live to two-track, with no edits, in Manchester. I’d always thought that the Orchestra took a Miles Davis-Teo Macero approach to their records, splicing together the highlights from extended jams into a lysergic collage, but it’s fun being wrong and these trips are all the more enjoyable for their assured, in-the-moment vibe. Parts 2 and 4 up the rock music ante, with a nice spiralling guitar line reaching through the carpentry workshop clonk in the former and a full-on VU Banana stomp in the latter. It may not be enough to send me up to Lexington 125 but it’s certainly sick and dirty enough for a post-caffeine nod-out. My favourite, however, is the beatific glom of Part 3, its rising organ riff and constipated Brotzmann yowl insufficient to derail the blanket of its luminous drone cocoon. Sticky and bitter, it’s as satisfying as toffee laced with whisky. Suck it and see.

And while we’re at it, it’s worth having a butcher’s hook at Vibra-members Julian Bradley and Neil Campbell’s For Lila O, released back in December, the title a reference to the family of Wolf Eyes lynchpin and psycho-jazz poetaster John Olsen.

The mood is relatively chilled, with guitar and synth undulating in gentle, abstract shapes. Listening to these pieces is like snuggling around an open fire as the snowfall slowly covers your entire house. You may not be able to leave for a week, but with this much nourishing warmth, it’s hard to object.

I believe Campbell may be a bit of a James Joyce fan, but I’m not sure whether the glistening swathes of music that he and Bradley lay down here are a reference to the snowfalls in The Dead, that devasting final story in Dubliners. Whether intentionally or not, there’s something beguiling in the way that the pair invert the mood of stasis pervading Joyce’s narrative, transforming it into something as wondrous and nostalgic as childhood memories of Christmases past. Even the serrated edges of How To Wear A New Watch have that sense of arrested time that defines the festive season, that feeling of days passing in a haze of chocolate and TV, blissfully unaware of the claustrophobia and familial irritation affecting the adults. Even now, when the evenings are lighter and the tulips are poking out of the flowerbeds, For Lila O is as charming and enveloping as it was at the end of last year, and could set a new precedent for seasonally-appropriate drone: a Vibracathedral Orchestra Christmas album anyone?