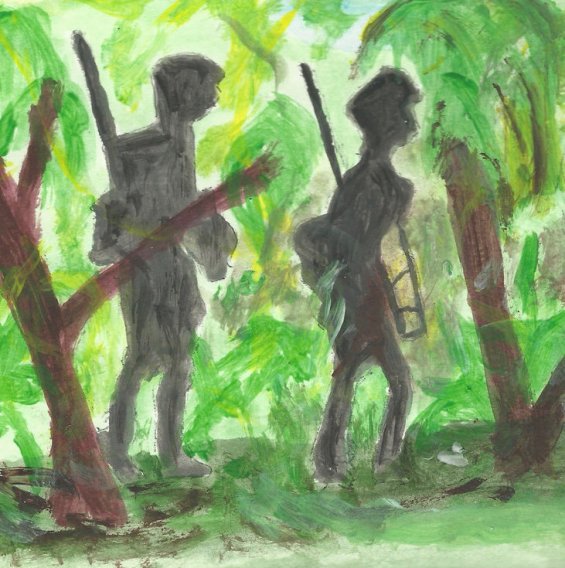 One recent-ish sound-birth from Sheffield’s Singing Knives Records, along with two of honourable mentions from a couple of years back. All three plopped into my postbox in the bleak post-Xmas interregnum, and my chakras have now aligned sufficiently to be able to give them the attention they deserve.

First up, the awesome and often quite baffling Usurper. Despite having been in operation since the turn of the 21st century (well, 2003 to be exact) I came to the sound-performance-prankster duo of Ali Robertson and Malcy Duff only relatively recently, first in a solo installation/performance from Ali Robertson in Gateshead and then in a sublime happening delivered by the duo at last year’s TUSK festival. Describing these performances would be pointless. One can only say that the combination of language game, absurdist theatre and deadpan silliness hit a perfect note of defamiliarisation, opening a doorway into a pocket universe that is a cross between Lewis Carroll’s Wonderland and Franz Kafka’s Castle. Usurper-world is opaque, surreal, funny and uncomfortable and most of the time I have no idea what’s going on.

All of which is applicable to The Big Five, which consists of a series of monologues, or texts, or poems, accompanied by junk rustlings, traffic grumble and other background kerfuffle. A kind of jaundiced exotica seems to be a running theme for the first part, the monologues of nineteenth-century explorers stranded in a faraway jungle, charting their gradual descent into madness and incoherence. “Snakes…. Snakes…. Mosquito…mosquito… giraffe…. mmm … the jungle…”  runs an early passage, like some malarial pastiche of Colonel Kurtz holed up in a rainforest shack with only worn-out copies of gap-year guidebooks for company. Elsewhere, a variety of cheesy accents recite grisly anecdotes with even grosser similes (“My legs got crushed so badly they’d fit through a letterbox easier than a postcard from your holiday with relatives” and so on), rubbing up against onomatopoeic grumbles (“rat-a-tat…”), porcine gruntings and the plasticky judder of a ruler pinged on a tabletop. A sackful of guaranteed WTF moments for all the family. 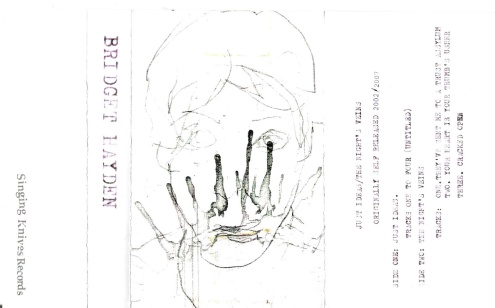 Just Ideas/The Night’s Veins is a set of recordings self-released by Bridget Hayden between 2002 and 2007, then collected and reissued by Singing Knives in 2015.  So, not exactly hot off the press, then. But it’s as unruly a collection of drones, skeletal blues and ear-flummoxing feedback squeals as you’d want from the sometime Vibracathedral Orchestra member, and is bracing, grating and totally ace as a result.

As its title suggests, Just Ideas is a collision of sonic sketches whose scratchy, hypnotic maximalism echo Hayden’s work with Vibracathedral Orchestra while highlighting the originality of her input into the group’s overloaded sound. The first half switches abruptly from layers of ice-cold electronics with eerie, wordless vocals to retro harmonium jams splattered all over with burbling oscillations in a creaking soundscape fit for a lysergic restaging of some Oliver Postgate gem – Noggin the Nog perhaps – before cutting to a bone-dry blues exploration. Hayden’s thorny clusters of slide guitar sidestep the politeness of technique and avoid such inconveniences as chord progressions to cut straight to the early 20th century source, wrenching handfuls of slurred, clattering notes from the revenant spirits of Charley Patton and Son House, as her falsetto weaves a mantra to protect her corporeal self against psychic assault from the aggrieved departed.

The Night’s Veins, meanwhile is plenty scouring. A rushing tumult of feedback and noise batters everything with a spray-gun bleach splurge that’ll have you rushing for the Nivea. But that cuts out just as you’re getting used to the pain, replaced by a cosmic balm of gurgly drone, vowelly croon and music box tinkle that’s as satisfying a collage as you’d need most days. This side bows out with a jumble of reversed guitar twangs and high-pitched circuit board whines that mix delicacy with pin-prick sharpness. 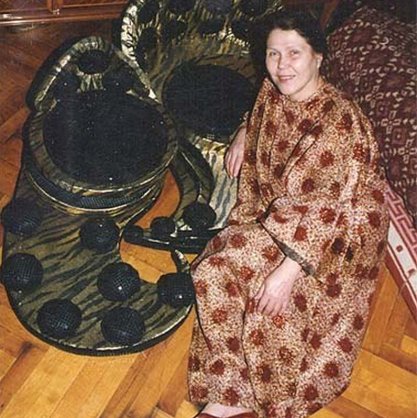 Posset’s Friction Rivers actually dates 2014 from but it gets an honorary mention here because, well you can never have too much Joe Murray, right? An opening quiver of guitar-ey twangs and rumbles signals a slightly more open-ended grab-bag of tunes than some of the more tightly-scripted Posset outings of late (the fantastic Gratitude Vest in particular). But fear not, a cornucopia of Dictaphone scramblings is available for your enjoyment across the two sides of this tape. There’s a great section of overloaded, animalistic burps and ruminations about halfway through the first side, which leads me to think that Farmer Murray may have left his tape machine in the barn at milking time, but before you can let fly with any dad-jokes about it being moo-sick to our ears, we cut to a close-up rendering of goblinoid splutters and whispers. Less bucolic, more subterranean, my precious.

Basically, all your Posset needs are addressed here, from identifiable vox chop-up to finely-ground tape slurry, with the occasional non-larynx instrument wheeze to brighten the corners. The nightmarish ferric warp that opens side B is a current highlight, but it’s all good, people, and an ideal way to plug any Murray-shaped holes on your shelf.