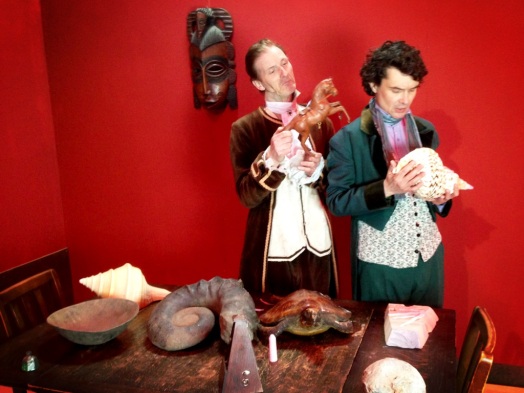 Pairing the inimitable ramshackle genius of the Bohman brothers with the cheeky rustlings of fellow traveler Richard Thomas, Secluded Bronte is a slow-motion tumble down the rabbit hole of abstract sonic excavation. Adam and Jonathan Bohman are unsung(ish) geniuses of British improv, their unswaying dedication to exploring the sonic peculiarities of everyday debris – tarnished forks, smeared wineglasses, rusty screws, discarded information pamphlets and the like – adding a welcome note of amateur idiosyncrasy to a scene populated since way back by maverick instrumental virtuosi. Indeed, the individuality of the Bohman worldview is such that one may be justifiably concerned that introducing another personality into their setup would dilute the potency of their boffin voyages. Fortunate, then, that Thomas has carved out a similarly extraordinary niche in the wide and varied canvas of out-there musicking, pushing musique concrete into proper weirdo directions with records such as 1999’s ‘Soggy Martyrs’ as well as churning out bilious prose at the helm of the (in)famous Cocksucker Blues fanzine.

Any worries at a potential lack of synergy are banished within the first few minutes of ‘Ten Point Plan To Destroy Astrology’, in which jaunty clip-clopping syncopation is wiped out by gusts of bracing scrape and layered found-sound poetry. If anything, Thomas’s presence boosts the hermetic scruffiness of the brothers in full flight, adding both chaos and dissonance to an aesthetic that is both artfully disheveled and rakishly unconcerned. Early spoken word sections are as discombobulating as a poet’s anxiety dream – everyone’s at the symposium, but they’re all talking at the same time, and none of it makes sense. And the droog grinding coffee next to your eardrums isn’t helping. Things calm down, thankfully, after the halfway mark, with a bucolic collage of xylophone plinks, aquatic burbles and jolly sci-fi electronica.

The poetry’s a little more intelligible over on side B, with the trio delivering a series of texts culled from council announcements, boiler maintenance manuals and various other written sources. It’s a tried and tested formula, but the everyday surrealism gained from the repurposing of these functional texts into an artistic setting still yields rich pickings. “The scale build up in the modern condensing boiler heat exchanger will seriously reduce the boiler’s efficiency. And the flow of hot water,” notes Adam Bohman at one point, to which the only sensible response is to scurry to the filing cabinet in search of one’s tattered British Gas documentation. And if the rest of the tape is lacking in further home maintenance advice, it more than makes up for this deficit via a gorgeous procession of eerie, low-key sounds. Skeletal piano fragments brush up against rusty hinge squeals. Damp patters coexist with hissing splish-splosh. A final mosaic of garble is given the heave-ho by an incongruous bossa-nova drum sample, its rimshot and hi-hat shuffle the equivalent of turning the lights on at the end of a disco to encourage everyone to get on home. Desafinado, for sure.