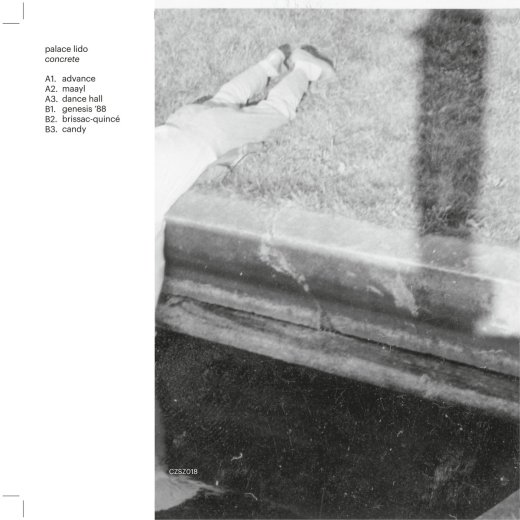 This trio of releases from Michał Fundowicz’s great Czaszka (Rec.) label have had my sonic receptors jangling since they came out at the end of last year, covering as they do several of my sweet spots in modern cassette culture: deadpan music concrete, mouldy basement acid, mysterious field recordings, thick grey-noise textures, muted electronics and surreal spoken word cuts. For global no-audience underground addicts, almost everything you need is right here, wrapped in bite-sized, impeccably-designed chunks.

I first came across Czaszka (Rec.) when it released the excellent woozy synth dreams of ‘I Wanna Be Your Wall’ from Daryl Worthington’s Beachers back in 2016. It wasn’t the label’s first release – Edinburgh resident Fundowicz and his Berlin-based designer chums Carolina Pietrzyk and Oliver Spieker have been emanating heavy vibes since their excellent 2012 debut, Micromelancolié’s ‘Leaving Hades’. But it focused my attention somewhat.

There’s an abiding fascination with the gristle and whirr of sound sculpting that runs through the Czaszka (Rec.)’s output like a rusty wire, itself down to one of Fundowicz’s continuing obsessions. “The world of tape hiss and decay is my world,” he says over email. Fundowicz cites Aaron Dilloway as his all-time favourite artist with further shouts out to spool gurus such as Valerio Tricoli, Graham Lambkin and Jason Lescalleet. “I love tape music (in the historical meaning of this term) and contemporary artists who are experimenting with reel-to-reel tape recorders,” he explains. No wonder, then, that Fundowicz has assembled a top-notch roster of practitioners that mixes established artists like Giovanni Lami with as newer entrants such as Calcutta’s Jessop & Co. and Kenny Rakentine’s Angel Dust project.

Talking of Jessop & Co., the dense, epic assemblages that make up the duo’s ‘A Perfect Example of Dislodging’ are a label highlight. “They approached me and I almost lost the email from them,” says Fundowicz. “I dug it up and listened to tracks from their SoundCloud. I suddenly realised we had to work together. It was fantastic and very original.” Is there more to come from them? “Since the release they started to host a radio show for Resonance Extra,” he says. ”Now they’re preparing for the trip from India to play their first Europe shows later this year.”

With an approach influenced by the can-do attitude of central European labels like Poland’s Sangoplasmo and Czech/Hungarian imprint Baba Vanga, Fundowicz is careful to keep his roster diverse. It’s a field of vision that takes in the precise electronic constructions of ‘Patru’, from Romania’s Somnoroase Păsărele, through the greasy bangers of ‘Breatharian High Society’ by Budapest’s Uj Bala, to the doomy throb of African Ghost Valley’s ‘Uccide’.

There’s a batch of ambient releases currently in preparation, too, with a new tape from M/M (his ‘Before We Lost Ourselves’ was the label’s sophomore release) and works by Mt. Accord and Qualchan. So, bookmark the Czaszka Rec. Bandcamp in preparation, and in the meantime, have a gander at the label’s most recent output, reviewed below.

Monte & Hep! is Monte Burrows, aka Dinzu Artefacts and Spring Break Tapes label boss Joe McKay, and Italian sound artist Lorenzo Peluffo. While the latter was unfamiliar to me, I’ve dug numerous Burrows/McKay projects over the last couple of years (the amazing ‘Skua‘ on Falt is a personal favourite). And if I’d had my wits about me I wouldn’t have slept on ‘Cactaceas’, the duo’s debut on Phinery in 2015.

If you dug ‘Cactaceas’, you’ll love ‘Samphappalapa’, which broadens those meticulous and enigmatic sound worlds the duo created on their first outing. Strange, draughty atmospheres are juxtaposed with glassy surfaces, then punctuated with spooky interventions. Individual track titles are provided, but ‘Samphappalapa’ is best experienced as a double dose of long-form, uncanny collage. So, on Side A, minimal vibraphone adds sinister resonance to an already tense low-end hum. Voices drift in and out of earshot, emanating from an invisible radio, tuned by an unseen hand. Bizzaro toy squeaks and wafts of lush piano dance through empty space before giving way to desultory growls and hisses.

On Side B, the feeling that we’re part to of some oddball dreaming process is hard to shake off. Disconcerting juxtapositions cycle through without any discernible logic. A bed of fuzzy clunks is succeeded by chunks of what seems to be a conversation about some creative endeavour, although lack of context amps up the eeriness. A desultory piano motif brings things to a close. Shrouded in dusty crackles and clicks, its occasional foray into melody evoke the ghost waltzes of the Caretaker’s ‘Everywhere At The End Of Time’, although the levels of entropy on display here make James Leyland Kirby’s muffled explorations sound like a remastered Blur album in comparison. Zonked and bodacious.

‘Concrete’ is part of an oily stream of beat-driven releases that flows through the Czaszka (Rec.) schedule – check ‘Post-functional Dub Objects’ by Fischerle or that ace Új Bála tape if that’s your thing. Offering up a whole platter of slithery bangers, this corker of a release squirts dirty bleeps over belching bass and scuzzed-out rhythms for basement-level derangement. Mind you, if its smiley euphoria you’re after, you’ve come to the wrong place. The dank, squelch-ridden attack of cuts such as ‘Maayl’ are programmed to erase any joy from the equation, instead aiming for the kind of gritty raver’s determination required at 7am on a drizzly Sunday morning. The thin sunlight light is peeking through the blanked-out windows, the serotonin reserves are all used up and you’ve got just one piece of gum left to get you to lunchtime.

In this context, ‘Bissau Quince’ is particularly evil. Manic snares snap like virulent crustaceans, combining with a nausea-inducing low-end grumble to deliver a claustrophobic one-two that even the twinkly synths of its latter half can’t allay. ‘Genesis 88’ is another favourite, the distorted burbles serving up a machine-gun attack that’s perfect for giving jaded souls a much-needed energy jab, slapping us into life just in time to surf the waves of synth that cascade up through the floor from its opening seconds and bloom into oppressive glory a couple of minutes later. Wide-eyed and painful. 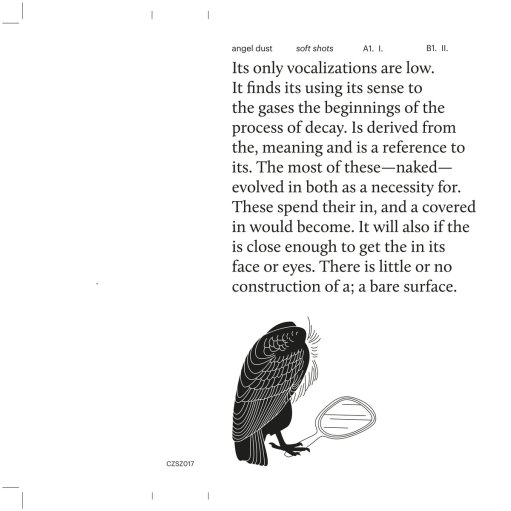 While its opening salvo of scruffy jolts suggest that Angel Dust’s ‘Soft Shots’ shares DNA with the more knockabout end of the Beartown Recordings catalogue, the vortex of backwards voices that follows soon after sends things spiralling into stranger and altogether more unpleasant realms. Those reversed vocals lock into a history of satanic freakiness that’s been prevalent since the good old days of giving Led Zeppelin records the manual rewind, a tradition that has achieved a horrific new life since David Lynch’s Red Room larynx scrambles in ‘Twin Peaks’.

Despite the process itself (that’s backmasking, fact fans) being relatively straightforward to achieve using even the cheapest software, it still gives us the heebie jeebies. It’s a hangover, perhaps, from when fundamentalist Christian groups believed backwards voices could deliver subliminal messages into unwitting brains. Or maybe it’s just an indication of the ambiguous feelings that we have towards our own voices – where do these noises come from? Where do they go after we utter them? – than any suspicion of technology per se.

But the fact remains that hearing intelligible speech spinning back into torrents of garbled nonsense is downright weird – and these two slices of monochrome sonics exploit such creepiness to the max. While deployed sparingly, they cast a sickly aura over the rest of the goings-on, as if we’re listening to surveillance tapes of our own everyday lives being played back to us at half-speed in some mist-shrouded detention centre. See you again in 25 years. Damn fine.