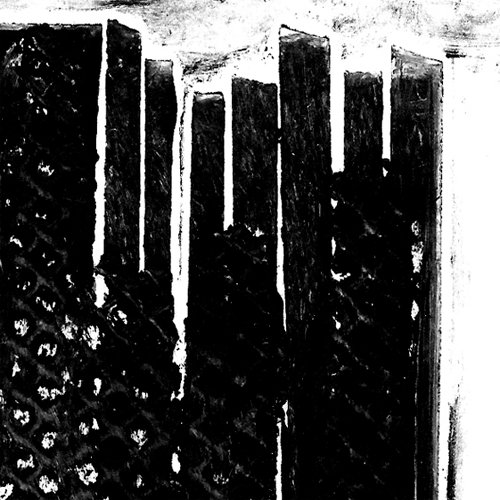 This double slice of aggressive, textured gristle has the snotty attitude of a vegan punk band headlining the annual convention of master butchers. BBBlood’s side sees the baron in more pugnacious form than his last couple of outings, satisfying as they were. ‘Absent Lottery’, his contribution to ‘Delirium Cutlet Impaste’, a fantastic split cassette with Posset and Stuart Chalmers, offered up a woolly chunk of prickly textures, like broken glass suspended in sour marmalade and smeared over a bug-eaten carpet. A live session, from the follow-up tape that collected sets from the same three contributors at the Fuse Arts Space in Bradford, was full of mangled jump-cut delights. Yet it exuded a lovely airiness that, despite its own efforts at machine-damaged abrasion, produced a stained and moody beauty.

Here, though, things are darned ugly. It’s another live set, from the sadly-defunct Montague Arms in south London. Recorded in 2016, it sweats grimness. The itchy opening bars soon open out into a juddering mass of warped spools and toxic squelch. Moaning foghorns compete with cop sirens and tinny cutlery-drawer assault. Modulated burps provide an overture for distorted electronic moans and saturated ear-shredding mulch. Even the glassy electro-loops that follow the mammoth-in-a-china-shop glam racket have the pained vigour of a particularly arduous visit to the dentist. Right on.

Poulsen’s contribution is equally unsympathetic. You’ll know all about this guy from the collaborations that pop up all over the shop, the most rewarding being Star Turbine with Sindre Bjerga. An inveterate collaborator, Poulsen is flying solo here, with a track called ‘Eine Kleine Noisemusik’, whose content is just as grisly as its title but far more rewarding. Frenetic electroid squeals chirp out nagging taunts before a screwdriver gets shoved in the circuit board for high-voltage thrills. It’s a jittery ride, with wibbling cries and ticklish jolts making for a nightmarish cacophony, whistling kettles an’ all.

Fortunately, Poulsen knows that all-out assault only ever results in ennui, which means that the abrupt gear-change halfway through is not only surprising but welcome. We get a nice passage of windy gloom and ethereal tones. Even spookier is a disembodied knocking that transmutes into a hoofing drum machine loop, as if some chancer is scooting their hotwired Skoda Octavia across the wasteland. But the shiny motor soon gets bogged down in the bacterial, debris-strewn compost. Its driver, having slithered out when things got desperate, can only watch as the Dad’s pride and joy sinks into the toxic depths. A real sludge dump, eh?