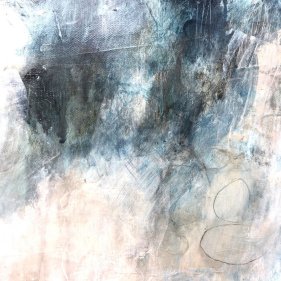 NOISE TRIAGE is the first in an occasional and ongoing series of short prose bursts, drawing attention to all the stuff in the We Need No Swords listening pile that, for whatever reason, hasn’t yet been reviewed but that deserves a wider audience.

Anyone reading this blog knows that it takes a heckuva long time for material to percolate through my rapidly ossifying brain. NOISE TRIAGE shoves jumpleads into the custard and kickstarts the charred synapses.

‘The Blow’ is an occasional series in which two artists get together to create something new. Its previous iteration saw Sophie Cooper and Julian Bradley unite for a slice of gorgeous, silvery doom-pop – a meeting that led to the pair making their sonic relationship official under The Slowest Lift moniker. This time around, ambient songwriter Jodie Lowther matches up with heavy vibes merchants A.R.C Soundtracks for a releases that’s mid-way between a split tape and full-on collaboration. First, we get a suite of Lowther’s skeletal, hazy song forms, their hypnotic melodies evoking all sorts of twilight visions and drugged reveries, as if Liz Harris’s Grouper was hanging out with Christina Rossetti at the goblin market. We’re into collaboration territory with ‘The Occasional Sleeper’, in which both parties weave sepulchral wheezes and liturgical groans, through which Lowther’s disembodied vocal tip-toes like a malevolent fairy. A.R.C. Soundtracks’ own contribution, meanwhile, is just under 30 minutes of slo-mo glacial apocalypse, with Lowther’s reappearing voice, this time as samples, to add shades of grey to the gloomy stomp and mulch.

Slip label co-founder Laurie Tompkins continues his charge to the outer margins in this excellently harebrained duo with cellist Ollie Coates. ‘Ample Profanity’ shows plenty of sonic continuity with the erratic jibber jabber of his ‘Heat, War, Sweat, Law’ from 2016, Tompkins drinking deep from his vocabulary of liverish vocalese and pugilistic keyboard dissonance to create an unholy racket. Coates brings plenty to the table too, not least a sense of compositional drama that gives these wrecked tunes shape and form, backed up by his fluid subtleties of his technique. Thus queasy, see-sawing cello dances wasted jigs with kiddy-casiotone spurts, before squaring off with torrents of tuneless metallic jangle. Cheeky pizzicato nudges coax gentle, vaporous moos from the aether, their bovine lullabies as soothing as they are outlandish. Barked gobbledygook ushers in torrents of teeth-rattling arco and synthetic abrasion. Totally hatstand.

A gorgeous and absorbing duo from ace object manipulators Astudillo and Jacques, recorded in Santiago de Chile in 2016 and released by Jacques’ own Crustacés cassette label. To get this tape – and I recommend you do if you’re a fan of Jacques or at all interested in the field of electroacoustic sound – you have to send a ‘postcard or a gift’ to the label’s mailing address. This might seem long-winded, but participating in Jacques’ ongoing postal art project anticipates the patience and rigour that ‘Atrapanieblas’ embodies and acts as a kind of prologue to the subtleties of the work itself. Subtle layers of motorised whirr and ominous beds of low-end throb provide suggestive and granular textures. Later, barely audible clicks and scrapes punctuate cold lagoons of silence. Occasionally mournful feedbacky whines seep into audibility, deadpan and languid. This is organised sound of the highest quality.

Pure heliotropic vibes on this delicate, blissful recording from Japanese sound artist Miki Yui. Electronics, field recordings and a solar-powered oscillator combine to create a suite of hymnals to the awesome and nourishing power of the sun. The album’s six compositions advance slowly but surely, often underpinned by shifting rhythmic beds that lend an organic character to Yui’s precise, sparse arrangements. That the interlocking scrapes, bleeps and hums often seem to eschew any human intervention doesn’t really matter. Yui’s artifice is subtle enough to evoke a complex ecology in which planet-wide machinations continue despite all of our efforts to derail them. Particularly affecting is the ambient heave of  ‘Solareo’, whose regular percussive clunks and surging synth drones provide tectonic heft to the hollow gurgles and metallic tics that punctuate its dense crust.

We Need No Swords is in danger of turning into the Joe Murray fan club, such is the regularity that his works appear in these pages. But his grainy spools and gargle are so good that the Posset allure is hard to resist. ‘Another Forever Tomorrow’, a recent subscriber giveaway from Gateshead’s TQ Zine, continues this winning streak, with Murray’s Dictaphone acting as an esoteric psy-ops trigger that sends listeners spiralling immediately into a parallel universe of nonsense versification and sound-art gloop. All key Posset signifiers are here in full effect: warped burble coexisting with cheap digital mewls, and jarring edits that push defamiliarisation to the max. There’s a nice nod to ‘TWANGERS’, Murray’s recent ruler-thwacking duet with KEK-W, and an exercise in fake Russian concrete poetry that would have Yevgeny Sholpo crying into his Variophone. As essential as ever.

Great set of desolate robot grooves by the enigmatic Januszewski and Szlazak (aliases of Nick Edwards and WNNS regular Stuart Chalmers, apparently). This unruly mess of burbles and bleeps stimulates multiple endorphin rushes even as it evokes images of rusting mechanical entities lurching into systems overload. Atonal electronics ping, squelch and bong with abandon, their jittery overlapping repetitions occasionally forming themselves into dubby, rhythmic grids, but more often pouring out in a cavalcade of synthetic debris. Think Wall-E on MDMA at the end of the universe.

On ‘Emo dub’, Mateusz Olszewski stitches audio from autonomous sensory meridian response (ASMR) YouTube videos into drifting piano and electronic soundscapes. It works best when Olszewski highlights the inherent creepiness of this stuff, repurposing the sonic content create something at odds with the intended aim of relaxation or whatever. In ‘Friends’, Olszewski loops and pitches down a speech fragment – “It’s like the knowledge that he listens to me … it’s like there’s a friend there waiting for you” – then matches it to an ominous techno chug, resulting something as eerie and sinister as Bam Bam’s bad-trip classic ‘Where’s Your Child?’. Elsewhere chilly digital isolation is the order of the day, as on ‘Missin’ M’, whose late-night club vibrations switch out communal rave euphoria for blurred alienation.

‘Porous Inner Montage’ consists of nine atmospheric electroacoustic pieces that bring widescreen drama to a field that too often descends into dusty hermeticism. Low-end ruminations and minimalist piano chords nod towards ambient music, but discomfort rather than bliss is the intended result, with cavernous reverb adding suitably goth touches. Atkins’ sense of space and scale raises this above the average, with the cinematic sweep of his backdrops contrasted by sudden darts of static or yowls of electronics, as if some sentient microscope is on the prowl through the catacombs. ‘Part 4’ sees echoey voices drifting between curtains of scuzz and disembodied percussion, as someone nearby chomps on a kebab made of tinfoil. ‘Part 7’ is a little more tranquil, its gentle tones cascading in resonant drizzle while a copper kettle whistles and an amphibian choir keeps it company. Just another Sunday afternoon at the pond, ma.