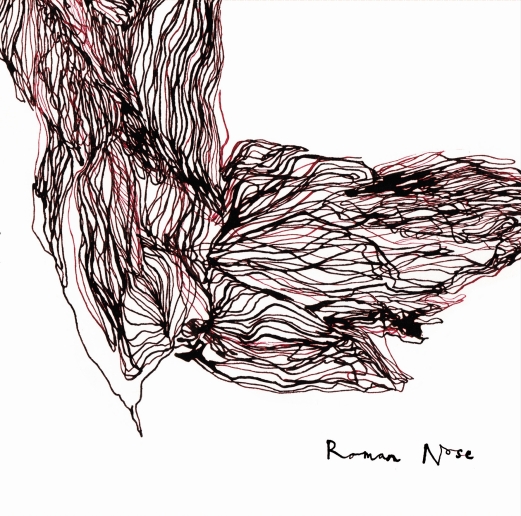 Roman Nose is as loud and chaotic as a brass brand being ground into twisted pieces by a vast garbage disposal unit at the bottom of the world. The quartet’s outpourings exist in a grey zone somewhere between the tapehead skreek Joe ‘Posset’ Murray and THF Drenching, the gnarled grouch of Elvin Brandhi (Yeah You, Bad At Maths) and the post-technique free improv of the mighty Historically Fucked. Indeed, the latter’s Otto Willberg crops up on double bass here, proof that Roman Nose operates within a disease vector covering a large swathe of no-audience topography (other personnel are Singing Knives’ founder Jon Marshall, vocalist/flautist Sara Mcwatt and percussionist Charlie Collins).

On this, their debut record, Roman Nose conjures dense layers of junk noise with wizard-level skill, and so describing what’s going on in this abrasive clatter at any one time is difficult. Various instruments are plucked, blown and scraped, while ear-scarring bursts of noise unspool regularly. The hellish lament of ‘A Skin Container’ matches keening moans with bowed bass grunts, an uneasy tom-tom patter and a patina of mouth crunch, all wrapped up in topor-ridden angst. On ‘K.S. Trespass_Egress’, hollow hoots cruise over craggy, distorted blurts, punctuated by grumpy drum thumps. Elsewhere, strangled jazz syllables jostle up against migrainey honks, and plangent whines emerge from an insistent, grit-laden bedrock.

It’s not that this atonal jibber-jabber is hard to ignore. Upon hearing these testing sounds, least one inhabitant of We Need No Swords HQ has voted with their feet (itself an imprimatur of quality for this album). However, once you open yourself up to Roman Nose’s mouldy cacophony, you’re in it for the long haul, dragged ever closer to its malevolent nucleus like some hapless galactic traveller drawn towards the event horizon of a black hole. Chris de Burgh in a dark mirror. Major Tom in the Upside Down. To be fair, the effect is never less than bracing. As a result, Roman Nose may not be what you want in this freezing winter of despair. But it is definitely what you need.