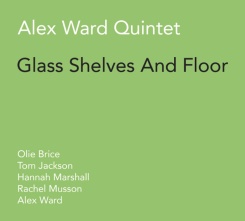 Neither wholly composed nor totally improvised, this piece from Alex Ward displays a liquid, indeterminate grace that surges from icy beauty through cheeky dissonant chaos and back again in 30 short minutes. It couldn’t be more different from the avant-punk shredding of Ward’s work with his Deadly Orgone Radiation trio – whose Power Trips album came out around the same time as this – although the two releases share a genre hopping insouciance that makes them a pleasure to listen to.

The modernist chamber improv of Glass Shelves and Floor is blissfully astringent but always supple and free-flowing. It’s not always easy to tell which bits are composed and which are improvised, but that’s a good thing, adding to the work’s sense of travelling fluidly across territories. There are two versions on offer here, one studio recording and one live. In both the ensemble  playing – from Olie Brice (double bass), Tom Jackson (clarinets), Hannah Marshall (cello), Rachel Musson (tenor sax) and Ward himself (on amplified clarinet) –  exhibits a kind of strength and flexibility that’s like some Victorian glasshouse, simultaneously airy and tough.

These group sections recur throughout the piece, appearing then receding effortlessly like some sped-up film of a garden coming into flower, before fading away for spots of solo improvisation. While this is pretty standard for many jazz and orchestral works, Ward subverts things a little by making the joins between the sections so seamless that the transitions are almost unnoticeable. So, for example, at around 10 minutes (in the studio version) we drop from a frenetic clarinet, bass and saxophone workout into a squall of noise – possibly from intense double bass string rubbing – and back into a yearning, dissonant ensemble drone almost without noticing. This is a particularly enlivening section, with Ward and Jackson’s clarinets darting in between the deep bass grind and sax rasps. Ward occasionally throws some curveballs into the mix to stop things getting too polite – notably a distorted clarinet thrash early on and a full-on dissonant assault two-thirds of the way through that’s like a mushroom cloud of Penderecki-style dread – yet he’s sensible enough to keep the tumult in balance.

The final third sees the quintet re-establish the organic structures of the opening section, yet there’s still time for one last euphoric blowout, the reeds rasping and tooting and the strings rattling and thrumming, before everything falls, finally, silent.

Check it out here.