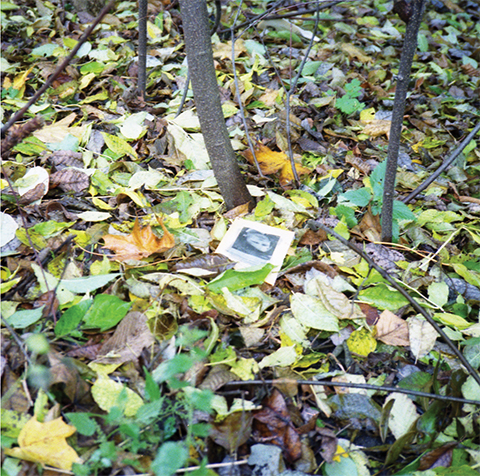 Like a Rolling Thunder Revue for the no-audience underground, these chancers ripped through the north of England a couple of months back, scorching eyeballs and liquidising the squidgy brain matter of all who witnessed them and leaving only happy memories and this tour CDr in their wake.

A no-frills melange of voice box strangulations, muffled noise collage and laser guided drones, Ineluctable modality of the visible (someone’s been at the Ulysses again) collects two snippets each from Harrison and BBBlood and a single extended phase out from Aqua Dentata. Harrison’s interventions kick things off to a bracing start, his tape manipulations and vocal blurts sitting somewhere between studied improv concrete and bloody-minded chaos. (Je Suis) La Loi does that brilliant trick of repeating a single phrase ad nauseaum, probably culled from some language tuition tape, until it loses all semblance of meaning, hollowed out by the constant, numbing repetition. Companion piece The Rye flops down into a murk of tape fuckery and blowout guff, seething in a puddle of its own do-do with gin-sodden frustration. A niece pair, which sit perfectly with Harrison’s lovely Others Delete God cassette on Reckno.

Breathe in, breathe out. Breathe in, breathe out. Breathe in. Breathe out. Next up Paul Watson, aka BBBlood, moves away from the everything-louder-than-everyone-else approach of his previous work with the brooding heave of Xinbad Rapid, which cycles through finely-detailed undulations of throb before growing into a fungal groan, its distorted surfaces smeared by mossy, fungal cloths. His second track, Nexistence of Vividence, glances back to old territory, looping great chunks of muddy debris into slow rotation, like a rotting cart dragged through a bleak rural landscape, its cargo of plague ridden corpses occasionally spilling onto the muddy ground. But in the final minute or so, Watson surprises us, hosing everything down with rectilinear stabs of subdued, glassy tones.

After all that, it only remains for Eddie Nuttall’s Aqua Dentata project to cast a holy light over the junkyard, bathing us all in its soft light. Neither wave nor particle, Nuttall’s vibrations are suitably transportative, seemingly plugged directly into the mainline to eternity.  For this 12-minute piece, Nuttall layers his blissful synth lines with keening wind figures – saxophone maybe, or ocarina? – that curl slowly round those distinctive metallic drones, like sublimated ice streaming from a comet’s nucleus. Deepspace chillout. Heaventree of stars hung with humid nightblue fruit.