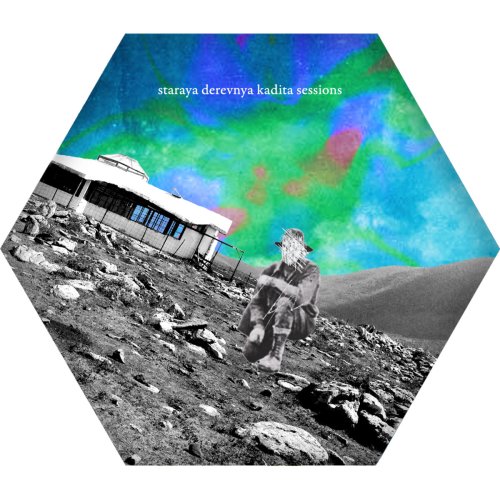 This mysterious package dropped through my postbox a good few months ago now, with very little information accompanying it. It’s a rather enchanting artefact, from the psychedelic woven sock in which it is snugly wrapped, to the folded lyric sheet bearing texts in Hebrew, Russian and Dutch, through to the eight tracks of woozy devotional music contained therein. It’s been a regular on the We Need No Swords office hi-fi ever since, the combination of ethno-grooves and multilingual incantations proving an enduringly compelling trip. For the most part, it recalls choice cuts from Damo Suzuki-era Can put through a 21st century-noise-improv filter, the fluid rhythms providing an unfussy chassis for the various sung and spoken texts, keeping its surging cycles of instrumentation in some kind of check. But the beats are looser than Jaki Liebezeit’s tight grids, augmented by a bazaar’s worth of percussion from across the globe – tablas, bongos and the like all make their presence felt, fortunately usually in fairly subtle tones, as on the extended vamps of Kadita, which closes the album. In fact those rather space-out vibes are in contrast to a rather frenzied start – in Hram, dense waves of theremin swoops, guitar fuzz and shruti drone swarm around screamed vocals and euphoric chants, like some Vibracathedral Orchestra jam ramped up to a nervy, claustrophobic extreme. That’s not to say it’s all plain sailing after that, however. Deep cuts such as the cosmic organ meander of Sages, with its Hebrew and English vocals, are balanced with garish bad-acid workouts like Het, which keeps things firmly away from polite world-beats-trip-hop territory.

It’s a bit odd, to be honest, writing a review without having any of the usual information as a comfort blanket. Fortunately, a quick Google search reveals some key information: that Staraya Derevnya is Gosha Hniu and an assorted crew of instrumentals and singers and that Hniu has a history of putting out interesting physical releases  – 2010’s From Inside The Log appeared in a burlap bag and included enigmatic old photos. I’m sure you can discover more if you’re so inclined. For the moment, however, it’s enough to say that this is a diverting listen and a worthy addition to the field of hazy devotional psych wig-outs. I’ll leave the final Mark Wharton, who runs the occasionally-pugnacious Idwal Fisher blog, and who was sent Kadita Sessions at around the same time: “And so it goes. Each track a beguiling mix of sounds, voices, languages and styles, a journey, a testament to the producer’s skill and a joy for the listener.” Praise be.