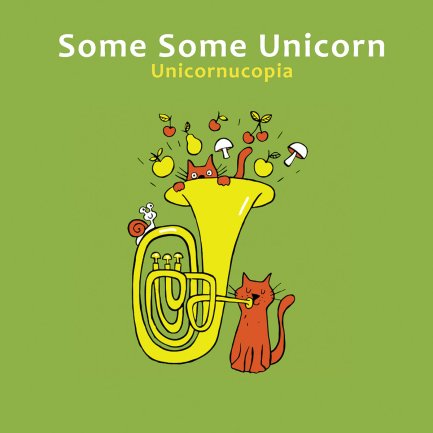 Some Some Unicorn: Unicornucopia (self-released CD and download); Murmurists: I Am You, Dragging Halo (Zoharum CD); Costis Drygianakis: Wings of Winds (Granny Records CD and download)

Large groups present a particular set of logistical and artistic challenges for experimental musicks of all stripes. The flat structures of free improvisation, so crucial in allowing for individual expression and dynamic interconnections, that work so well in smaller groups tends towards aimless bloat when more people get involved. Direction can help, although the idea of a ‘leader’ steering the ‘band’ in the ‘right’ direction is antithetical to the egalitarian principles that are so important to its practitioners. Elsewhere, too, quantity doesn’t always mean quality  – compositions that feel obliged to use everyone in the room (or every sonic fragment collected during the research phase) often have an over-egged flavour, the try-hard nerviness a turnoff. Less is more. Even when you’ve got more to play with.

There are, of course, a variety of ways to deal with these issues, and things get easier if you abandon free improv purism. And if you’re not wedded to having everyone on stage (or in the studio) at the same time, even better. Shaun Blezard, the Cumbrian-based artist behind the ‘free flowing collective of improvising musicians’ Some Some Unicorn, uses digital technology to help put the pieces of his puzzle together. Blezard assembled an evolving cast of around 50 musicians at studio sessions in Salford, London, Lancaster and Ulverston, and then stitched the results together to form Unicornucopia. Minimal overdubs mean that the sound is still fresh – although different musicians were recorded playing live together at each studio date, it sounds like a single, extended jamboree – and the benign smoke and mirrors approach gives the album a pleasing hyper-real unity. It helps that the musicians involve understand what’s required and, in general, get with the project to push it in the right direction. There is a general drift towards tranquility, with cuts like Echoed Feelings twining wafting horns around discrete piano plonks and starry twinkles, and things tend to work best at their most droney. Compliance Unit is an early, groaning highlight, and the cosmic folk of By The Thyme (Some Some) sews bass skronk and bass thwacks nicely into its eerie lullaby. But, on the whole I could have done with a few more sharp elbows to nudge my meditations towards harsher climes.

Anthony Donovan’s Murmurists project is the desolate nightmare to Some Some Unicorn’s utopian dream. Like Blezard, Donovan marshals a squad of contributors (including stalwarts such as Sharon Gal, Anton Mobin and Mark Browne) to a common aim. But rather than the live-in-the-studio feel of Unicornupia, Donovan draws on musique concrete, noise, drone, extreme metal and corrupted computer music to create oppressive, boulder-strewn collages in which oily splotches of noise seep over clotted electronic debris and disembodied voices intone uncanny poetry. Cut together into a single long track, I Am You, Dragging Halo builds a labyrinth of chaos, a brain bomb of toxic emissions in which the only possibility for escape is to crawl even deeper inside. Back in May 2016, when I Am You, Dragging Halo was released, its weave of crumbling drones and heaving drum-clatter noise seemed like transmissions from a wrecked future, a chorus of gibbering voices calling warnings in an unknown syntax. In February 2017, however, it seems more like a documentary,  our ruined world viewed through a shattered smartphone screen. Above it all floats Donovan, a despairing angel of history, his wings broken, unable to escape the virulent flux. All the doors are closed. All the meetings are closed meetings.

The squall of bloops, rushing snares, clarinet hoots and John McCaughlin-style shredding  that erupts at the start of Costis Drygianakis’ Wings of Winds certainly suggests some vintage improv collective getting jiggy in fine style. But closer inspection reveals something more nuanced and mysterious, a long-form work of intuitive electroacoustic composition that deploys improvisation as one of a matrix of techniques as it moves carefully through its 40-or so minute runtime. In fact, that opening blast is deceptive, working perhaps as a palette cleanser rather than a statement of intent. There’s something similar positioned at the end, but what happens in between is radically different to those those two blowouts – a calmer, more considered set of sonic gestures. A rain of metallic plinks acts as a gentle backdrop to a recorded conversation. A simple violin figure is accompanied by only a soft crackle. An eerie cocoon of electronic whines is punctuated by jittery percussion. A conversation is barely audible.

Enigmatic, sure, but there is a sense of space and of purpose to Wings of Winds, with Drygianakis’s meticulous edits bringing together sections from around 20 individual musicians, plus two groups (a trio and quartet) and voices sampled from ethnographic recordings. Yet far from being the maximalist jam session that you might expect, the album makes use of that multitude almost counterintuitively, shaping its components into austere and meditative beauty. This is, undoubtably, Drygianakis’s show, despite the legion of contributors, and his ability to not be overwhelmed by his source material is credit to a compositional sense honed over a career working in tape and sample manipulation. Subtle, nuanced and powerful, Wings of Winds is nourishing listening for sure.