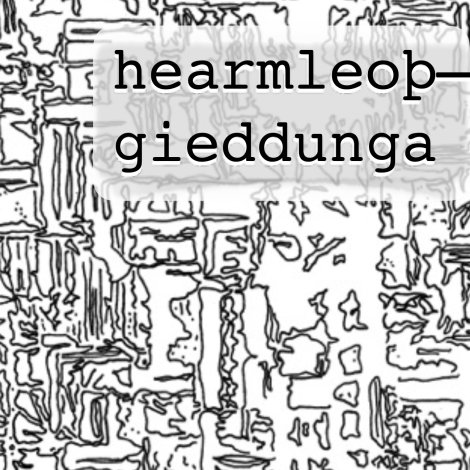 Lauren Redhead’s ‘hearmleoþ—gieddunga’ sets passages of Anglo-Saxon poetry into murky, frost-ridden soundscapes. Mixing ancient sources with contemporary composition isn’t the most obvious combination, but for those of us who dig works from thousands of years ago just as much as we devour the latest out-there sounds, it’s like a dream come true.

In any case, it works brilliantly, with the spoken word texts – drawn mainly from those heavy hitters of Anglo-Saxon poetry, ‘The Wanderer’ and ‘The Seafarer’ – adding extra strangeness to the already-eerie layers of electronics, organ, violin, double bass and electronics. Kind of like hearing a Viking rapping pure melancholy over a particularly out-there Apartment House performance. Yeah!

I needed to get the low-down on how Redhead came to create ‘hearmleoþ—gieddunga’ and her thoughts about whether Anglo-Saxon poetry has the power to reach across the gulf of time and still speak to us. I was interested in her process, too – her release notes mentioned working with collaborators, and talked tantalizingly about bringing elements of improvisation and performance into a composed framework.

Fortunately, Redhead was happy to answer my all goofball questions. Her responses, reproduced below, provide a fascinating guide to the creation of this great release.

We Need No Swords (WNNS): Tell us about the genesis of this project? Was it a commission, or something you were keen on exploring yourself?

At the same time I started to be interested in the Anglo-Saxon sources, and so when I turned it into a concert piece I chose the title (meaning lay-poem, I wanted to contrast with the “religious” nature of the original sources) and then I chose a quotation from ‘The Wanderer’ as the programme note that resonated with the original texts. It wasn’t until this piece had been performed a few times that it then became the first of a series.

All of the pieces were created individually, but ‘seo níedhæmestre; se tidfara’ was invited for the 2018 BeastFeast festival in Birmingham, for the organist Mari Fukumoto to play, and ‘ingenga’ came about after an invitation to consider making a piece for an improvising viola da gamba performer.

WNNS: Could you take us through which Anglo Saxon texts you chose for this release? And I believe you created a new piece, too?

LR: The texts that I used came from a variety of poems, but mainly ‘The Seafarer’ and ‘The Wanderer’. I became interested in these poems and particularly in the original text and what it means to translate them. But I also looked at other poems like ‘Judith’, ‘The Battle of Maldon’, gnomic verses,’The Dream of the Rood’ and then some other fragments of text. ‘seo níedhæmestre’ is the piece where most of these appear, and this is also where I created a new poem. I used some OuLiPo procedures to select fragments from the poems, distort them, and then create my own epic poem that because the narrative for the work. It’s never heard or ‘recited’, though.

WNNS: What prompted you to use these specific Anglo-Saxon texts? Did the text come first – or did you have some music already that suggested an affinity with these texts?

LR: I’m interested in obsolete practices and dead languages. I’ve previously done work using sources from parietal (cave) art and from Linear B and Minoan art. The Anglo-Saxon period is interesting to me for similar reasons. Partly, I’m attracted to the appearance of the art of the period and I’m also fascinated by looking at something and wondering how it was experienced by the people who made it and looked at it and used it.

Also, Anglo-Saxon as a language has echoes in modern English and German, but then again not. There are a lot of false friends, etc. One thing I did when creating the graphic scores was to re-create aspects of images. The reason for this is not just to create scores that are aesthetic in terms of their appearance but to physically experience making those kinds of marks and movements with the idea that they could then inform the kinds of things I did in performance.

So, it was actually visual art first, and then language  (but not poetry) straight away. And then I started to read and look at the poems and also look into how they have been translated and could be translated.

WNNS: Despite the historical distance, some of these Anglo-Saxon texts still speak to us. They often talk about migration, about difficult journeys across hostile terrain, about loneliness – but also about trying to keep communities together in times of conflict. Does any of that resonate with you? Was there any attempt to make that kind of linkage in your work?

LR: I absolutely agree with you here. In the notes for the album [which you get when you download it from the Pan y Rosas website] you can see some snippets of the scores, as well also the programme notes I gave the pieces in performance and my translations of them (which aim to be a bit more contemporary and a bit less poetic).

So you can see the themes that I picked up on – migration, particularly by water, and the hardship associated with it in terms of loss of identity.

In the piece ‘seo níedhæmestre’, I created a new poem as source material that tells the story of a woman experiencing disaster and having to travel away from her homeland. I haven’t tried to foreground this, partly because I think that contemporary events all form part of a contemporary consciousness, but also because it’s a part of the source material already and I think it is impossible not to respond to that.

WNNS: The scores combine subtle touches of early music that evoke the Anglo-Saxon period with very contemporary sounding atonality / electronics. How difficult was it to get that balance right?

LR: I feel like the music is more contemporary than it is old. I use source materials but I am always using them in my own way and with my own performances in mind. I don’t think there is any sense of trying to recreate or sound like anything, even though I like the sound of the early instruments.

The balance is just intuitive and to do with my preference for the layers of sounds and different ways of playing. I work closely with Alistair [Zaldua] and we rehearse the pieces a lot and try to find the repertoire of sounds and playing techniques that belong independently to each one. He also builds custom electronic instruments to do this. It is very personal to us.

WNNS: Could you tell us a bit more about your collaborators? You mentioned Alistair Zaldua, and you also worked with Josh Cannon. What prompted you to choose them? Had you worked with them before?

LR: Alistair is a long-standing collaborator and wears perform as a duo for organ and electronics so it was almost a given that we would work together. The longer we’ve performed as a duo, the more different processes of performing we’ve been able to create and investigate, and recently we’ve been adding Alistair’s violin performance as well. So there was already a history of collaborative working and I was able to create scores and ideas that gave him space to contribute, too.

When all the pieces had been written and performed I got some funding for producing the final album which was going to be a creative process in the studio. So Josh was appointed as part of this – through an interview. We were really impressed by his own creative work, including an installation involving a mirror that produced sound depending on the proximity of the listener to it (that was exhibited at the Turner Contemporary Gallery as part of the Oscillate festival).

The original idea was for the person we appointed to be involved in mixing and mastering, but Josh actually brought a lot of independent ideas to the project that really added something to our process and so we decided that he needed to be named as an artist and not only as an engineer.

WNNS: The release notes provide an interesting summary of the process by which these pieces came together. I tend to think of composers as beavering away in glorious isolation then presenting a score to musicians to play. But it sounds much more collaborative than that. How did you find the process?

LR: I like to collaborate and I think that it is – or can be – a really productive way of working. Breaking down the hierarchy of composer/performer or ‘work’/performance involves making this process of creation public. And I really want there to be space in my work for people to respond to it and for me to respond to them. It’s a way of working that I’ve come to over several projects and feels quite natural to me now.

WNNS: Your release notes talk about scores, performance and studio electronics. Was everything scored? Or were there gaps for improvisation, or post-performance editing / additions?

LR: Every piece has a score, but the scores use graphic notation and are quite open. I also created fixed media audio materials that are used in performance. Then there is improvisation, but within the situation I just described – where we already have decided the limits of the piece. It’s not free improv but more like devising.

Each piece has had a few and a different number of performances so we used parts of most of those to create the album but sometimes also created some extra music in the studio as well. What you’re hearing is impossible as a live event, but also has a lot of ‘live’ elements too.

WNNS: How does ‘hearmleoþ—gieddunga’ sit in relation to your previous work? Is it a continuation or a new direction?

LR: I think it is a continuation. There are two projects (‘entoptic landscape‘, and ‘ijereja‘ – both on Pan y Rosas Discos) where I worked in a similar way with open scores, iterative processes, and improvising performers and collaborators. They both used source materials too – the cave art and Linear B that I mentioned above. The music is in some ways different, because the materials are different, but also I’m interested in the same layeredness, processing and the use of speech and voice and text.

However, although this is similar, each time I do one of these projects I feel like I find out something different. This time it was really the process of continuing the improvisation into the studio and collaborating there as well as in the performance that was new.

WNNS: Finally, can you give us a clue as to what you’re working on at the moment? What’s the next big project?

LR: Yes, the project is called ‘The Octopus’. I’ve written an art song from soprano and piano for the fantastic young soprano Rebecca Hardwick. That will be premiered next year, but I’m also in the process of extending the piece into a 45-minute one-act chamber opera that will involve soprano, violin, electronics, and projection. The text is from Victor Hugo and I’m quite excited by the prospect. Hopefully I’ll organise some shows in the UK for next year.