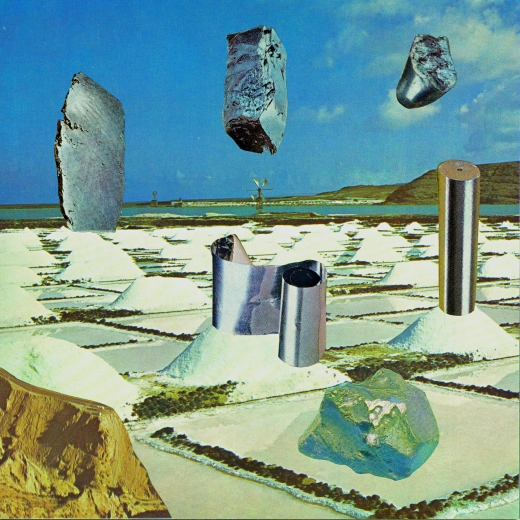 This prismatic odyssey by celestial fellow travellers Astral Social Club and Grumbling Fur is a glommed-up journey through the vibrating hemispheres of the ever-expanding world-brain, its grainy pulsations guaranteed to rewire your lobes in an ongoing shuffle of permanent revelation.

It’s the latest in Daniel O’Sullivan and Alexander Tucker’s Time Machine Orchestra excursions, after a couple of deep dives into amniotic devotion with Charlemagne Palestine. This time around they’ve invited beatific force of nature Neil Campbell into the cockpit, deploying his Astral Social Club moniker to bring a little bit of fungal unsteadiness to their hieratic pomp.

Not that Tucker and O’Sullivan are averse to a bit of ‘shroomy drift themselves, of course. The Grumbling Fur discography has always balanced structure and expansion with equanimity. For every bijou mouthful of psych-pop – ‘Heavy Days’, ‘Acid Ali Khan’, Dancing Lights’ – there’s an equal and opposite dose of margin voyaging (‘Molten Familiar’, ‘Protogenesis’, ‘Orb of The Woods’).

Nevertheless, the Time Machine Orchestra series has given the pair licence to dive deeper into the lambent gloop of the inner realm, and ‘Plasma Splice Trifle’ is a strong addition to this burgeoning canon. Campbell, of course, rarely fails to deliver and here he stays faithful to his brand values of dense, shimmering radiance throughout. That’s his dreamy baritone that introduces album opener ‘Back To The Egg’, reciting a stanza or so of goofball Holy Mountain wordage before a shuffling jamon-slicer loop propels a blanket of gently fired burble into the warm sunshine. His enviable larynx adds a nice contrast to Tucker and O’Sullivan’s lysergic choirboy croon on ‘Ozone Antifreeze Intelligence’, the disembodied voiceover (“Oh-zone-shimmah…”) blurring the Eno pattern recognition as it floats like a giant teardrop over the twisting mandalas.

But for all that, ‘Plasma Splice Trifle’ is a team terrific effort, with synthesis rather than individualism the order of the day. Cuts like ‘Three Years Apart’ are a sonic larva lamp, the trio’s emanations drifting through viscous amniotic gloop in a constant state of becoming, combining and recombining in glossy plasticine lumps. The track gradually morphs from tidal swirl into choppy delirium, its gassy tremolo huffs circled by ominous swoops of violin like crows pecking at jewels in a thunderstorm.

‘Toejam Boxdrum’ pulls a similar switcheroo. Its opening half is a hissing cacophony of rattles and blurts before rubbery bass, fuzzed-up guitar and (possibly) violin trade elegant swipes. The only thing preventing their dance from turning into a permanent mutant quadrille is a distinctly Floyd-ish wall of angsty yowls, which boots the joyful jigs into a grouched-out headache snarl. But hey, it was nice while it lasted.