Two releases that, although very different in style and approach, both swerve away from ideas of collaboration and harmony in experimental music, instead revelling in the creative possibilities of destruction.

“All tracks made with the Galaxy Splitter”, say the release notes for this tape from Bristol’s Carnivorous Plants. I have no idea what a Galaxy Splitter is, but on this evidence its foul ability to rip apart the base material of the cosmos can’t be disputed. These four tracks capture viscous swathes of anti-matter whose very existence in our universe should be the cause for instantaneous and irreversible meltdown were they not encased in these heavy mantras.

True, the clumping bongo frenzy of ‘Glittering Green Gate’ is more a taster for the barfing heaviness to come than a caustic wrecker in its own right. Fortunately ‘Living String’ gets right down to business, its distorted stomp as evil as a burning spike stabbed repeatedly into your third eye while shapeless hordes gibber in feverish delight. A gradual breakdown into claggy noise continues in ‘Gelatinous Comet’, a grim farrago in which churning spasms of crank-shaft grumble and whiplash screech spurt out an endless stream of toxic slurry.

Given all of that malevolence, the epic ‘Plague Star’ focuses less on documenting the carnage and more on describing the aftermath. Low-key crackles seep across blistered craters, while burnt-out engines crawl painfully across mangled ruins. Bereft of human intervention, destroyed machines grind out their prime directives, unable to countenance any change as their power levels drain out in inevitable decay. Entropy, entropy, they’ve got entropy. 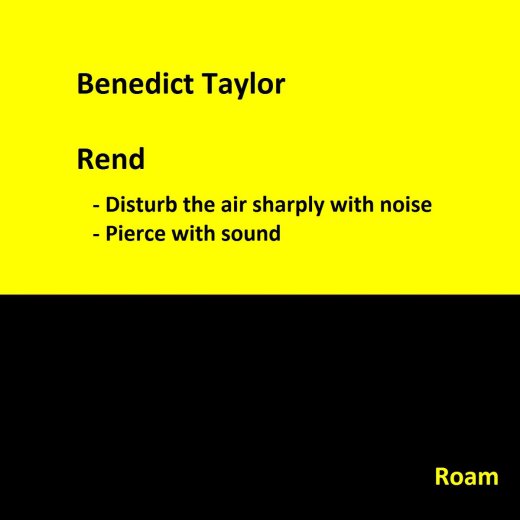 ‘Rend’ sees improviser and composer Benedict Taylor switch out his customary viola for the violin, although anyone expecting a kind fall-off in attitude or technique resulting from the swap will be disappointed. Taylor’s freewheeling, in-your-face approach is in full effect here, and if the cheeky flamboyance of his earlier recordings has been seasoned with tougher, more abrasive riffing on recent outings, his playing is still a delight.

Of course, with a title and mission statement such as this, the violin’s ability to push the boundaries of tolerable dissonance is going to be exploited, and Taylor doesn’t disappoint. The unbridled onslaught of ‘Ribbon’ is an early highlight, its coiled repetitions coming on like stringsed-up version of an Evan Parker circular breathing session, it ceaseless flow spewing out all sorts of incidental detail to revel in.

Of particular interest throughout ‘Rend’ are the specific physical sounds of bow hitting strings, that gritty friction that more conventional players erase in their attempt to conjure sweet notes seemingly out of thin air. While I suspect Taylor could do all that stuff in his sleep if he wanted to, his preference for majoring on the squeak, creaks and scrapes that result from his hectic, detailed shredding is much more fun.

On ‘Cleave’, he ramps up the velocity for a feverish outburst of loops and whirls. After a bracing open salvo, those yowls and mewls reduce to clouds of percussive scuffs and clicks, before re-emerging as taut barrages of whirling intensity. It’s abrasive stuff for sure, but compelling too. Cuts such as ‘Dissever’ dance through the air like an esoteric blade ritual, the lightspeed jitters describing both its fencing-master action and the shapes left behind in its wake.

If ‘Rend’ is occasionally exhausting in its high-octane carnage, Taylor’s refusal to engage in pure Hulk smasheroos is commendable. With ‘Rend’, ruination may well be Taylor’s aim. But its elegance is undeniable and exhilarating.